J.W. Fewkes: To preserve and to protect 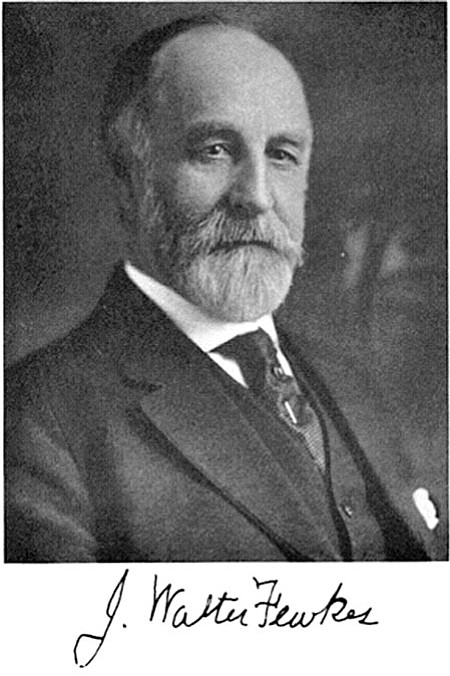 Jesse Walter Fewkes, an ichthyologist turned ethnologist and a man accused more than once in his professional life of plagiarism, was the last of the 19th century archaeologists to pass through the Verde Valley.

For 12 years following his graduation from Harvard, Fewkes was a marine biologist/zoologist, during which time he published 69 scholarly papers and was recognized worldwide as an authority on marine life.

But in 1888, while serving as an assistant at Harvard's Museum of Comparative Zoology, Fewkes ran afoul of his boss, another famous marine zoologist and the curator of the museum, Alexander Agassiz.

Agassiz and others accused Fewkes of several instances of plagiarism, having allegedly copied the works of others and claimed them as his own. Agassiz refused to reinstate Fewkes' appointment in 1889.

Prior to his departure from Harvard, Fewkes had spent a summer in Monterey, Calif., studying fish while staying with the family of Augustus Hemenway, a Boston shipping magnate. Hemenway's son Augustus and Fewkes were schoolmates.

At the time, Mary Hemenway, the magnate's wife and a philanthropist who advocated for Indian rights, was providing $25,000 a year for a large-scale archaeological expedition to the southwest.

Just as things were falling apart for Fewkes at Harvard, the expedition's leader and a noted archaeologist of the time, Frank Cushing, was also falling apart and out of favor with the Hemenway family.

Out of interest or necessity, or both, Fewkes quickly became an ethnologist/archaeologist, and found himself in charge of the largest archaeological expedition operating in the Southwest at the time.

However, past habits, an elitist attitude and his lack of proper training followed him west when he came to study the pueblo culture in Arizona and New Mexico.

Fewkes spoke no Spanish or Zuni, as his predecessors had, and was forced to use an interpreter. He had little understanding of the pueblo culture.

To make matters worse, he didn't even dine with the locals or on local cuisine, instead feasting in a private home on Boston's finest canned foods shipped by the Hemenways via rail.

And it wasn't long before he was once again being accused of plagiarism, specifically for stealing the work of his predecessor, Cushing.

Then while studying the Hopi at First Mesa, he paid a local Anglo, Alexander Stephan, for the knowledge Stephan had acquired from living with the Hopi. He then published what he had learned from Stephan as his own first-hand research.

When Mary Hemenway died in 1894, the expedition closed shop. Using his contacts once again, Fewkes found himself a job with the Bureau of Ethnology.

That brought him to the Verde Valley in 1895.

Accepting the Hopi clan migration myths as fact, myths he had heard in his earlier trips to Arizona, Fewkes had come to the Verde Valley to verify the facts behind the legends and search for the places mentioned in the stories.

Fewkes surmised that the logical migration route would have brought the Hopi up the Verde River and Oak Creek to the Coconino Plateau.

Exploring from its confluence with the Salt River, Fewkes found the ruins along the Verde River more closely associated with the Hohokam, the ancient people who once inhabited the Phoenix area. He found similar Hohokam related sites as he started up Oak Creek.

But when he reached the Sedona area he found what he believed to be the "Palatkwabi" of legend, and two cliff dwellings he believed were of Hopi ancestry, which he named Honanki (Bear house) and Palatki (Red house).

Fewkes' 1895 trip to the Verde Valley and the area around the Hopi mesas was the most systematic attempt ever made to correlate the Hopi myths with existing archeological evidence.

In spite of his faults and accusations of plagiarism in his earlier career, Fewkes became best known for his determination to share his work with the American public.

'He believed very strongly that once archaeologists were through doing their thing, that the sites should be stabilized and developed for the public," says Coconino National Forest archaeologist Peter Pilles.

"He also believed that archaeologists had an ethical responsibility to share what they had found and what they had learned with the public. To that end, almost every site he ever worked on was eventually turned into a national monument."

Fewkes was a strong advocate of the 1906 Antiquities Act that helped preserve much of what is still being studied. He was eventually appointed as the Director of the Bureau of Ethnology in 1914 where he continued his efforts to preserve southwestern archaeological sites.

March is celebrated statewide as Archaeological Awareness and Heritage Month. In recognition of the occasion and the fact that the Verde Valley has long served as a laboratory for some of the earliest southwestern archaeologists, The Verde Independent is presenting a four part series featuring the lives of four of those pioneers. The four, Edward Palmer, Edgar Mearns, Cosmos Mindeleff and Jesse Walter Fewkes, through their innate curiosity of things past and their vision for preserving those things for the future, not only left their mark on the study of ancient cultures in the Verde Valley but also on the science of archaeology they helped develop.
Contact
Sign up for our e-News Alerts
Most Read
7 days
30 days