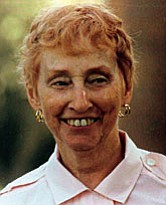 Verva M. (Callan) Dyment died March 13, 2008, at Mercy Southwest Hospital in Bakersfield, Calif. Prior to moving to California in February 2008, she had been a 37-year resident of Camp Verde and Cottonwood.

She was born in Kingston, Ontario, Canada, on April 27, 1916, to James and Elizabeth Callan.

She moved with her parents and two brothers and two sisters to California in 1929, settling first in Los Angeles and later in Coalinga, Calif. She attended Franklin High School in Los Angeles.

Verva married Harry L. Dyment in 1935 and the couple had four children. A resourceful wife and mother, she raised two sons, Ronald and Terry, and two daughters, Sandra and Verva.

She enjoyed a wonderful life with her husband who was a professional athlete. After his playing years were over, he and Verva owned a successful business in Los Angeles in the die making and graphic arts industry.

Verva was a communicant until her death at Immaculate Conception Catholic Church in Cottonwood. She also greatly enjoyed participating in community affairs in every place she lived.

A Memorial Mass will be held at the Immaculate Conception Catholic Church in Cottonwood May 8, 10 a.m.