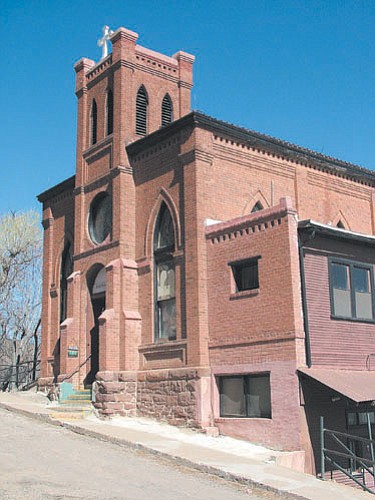 The Holy Family Catholic Church is one of four non-residential stops on this year’s tour. The church features a one-of-three pipe organ.

The 43rd annual Jerome Home & Building Tour on Saturday and Sunday, May 17 and 18, will truly give visitors a taste of Jerome, taking in the old, the new and the renovated. Nine locations are part of the tour schedule this year, which ends at Spook Hall for refreshments.

Four non-residential but historically significant buildings are on the tour.

The Phelps Dodge Administrative Office was built in 1919 and has recently been renovated. The three-story building originally had an apartment for Sen. William Clark, who used the office for business and entertaining. After he took over control of the mine, Clark built the United Verde and Pacific Railroad.

Phelps Dodge general manager John McMillan and his wife also lived in this building. Tour guests will see original fixtures, furniture and kitchen. The site offers a great collection of photographs that chronicle the history of Jerome.

The Holy Family Catholic Church, built in 1896, was destroyed by fire in 1898 before the current brick structure was completed in 1900, then restored in 1979 and 1980. The church houses a rare, one of only three, pipe organ.

Also on the tour is The Ladies Jail, which was built in 1918 and was Arizona's first Chrysler dealership. The jail was moved to Jerome from Yuma. Today, artist Sally Dryer runs the Soiled Dove Gallery out of the historic building.

As a child, Dryer was the voice of Lucy in four Charlie Brown movies.

Lawrence Memorial Hall, better known to locals as Spook Hall, will be the tour's final stop. Built in 1917, the site became a JC Penny store in 1937 until it closed in 1953. The building, owned by the Jerome Historical Society, is the center for many town activities and community gatherings.

The old is well represented by the Riordan House, known as the Pink Lady House. It is an authentic Victorian example of homes that once graced the boardwalk of Jerome's Society Hill, where mine executives lived. The Pink Lady is furnished with period pieces from the Victorian era.

Hillside House and the Vojnic House round out the "old" offerings on this year's tour. Hillside House was built in 1898 when Paul Smiley sold his saloon and opened a soft-drink bottling company so he could marry, Emma Rucker, the love of his life, and a captain in the Salvation Army.

The Vojnic House was built in 1914 as a home for company management. The son of the owners runs Paul and Jerry's Saloon, the oldest, continuous running bar in Arizona.

Two new homes are on the tour. Local artists Richard Johnson and Gary Felix both have their dream homes on display.

Proceeds support the events of the Jerome Chamber of Commerce.

The tour is not handicapped accessible. Although shuttles are used, walking and climbing steps are part of the tour in this steep, mountainside town.

Tickets are $12 for adults and $6 for children. Free admission is given to kids