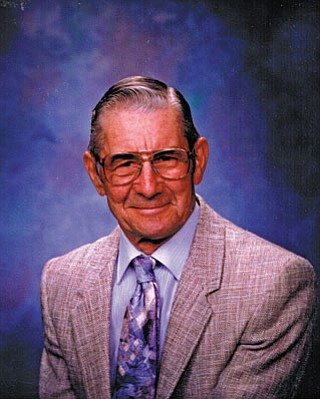 Calvin would have celebrated his 79th birthday April 29. He was born on April 29, 1929, in Milan, Mo., to Leonard and Clara Belle Glidewell.

Calvin married his high school sweetheart, Mary Ilene Franklin in 1948. Together they raised two children; a son, Steven; and a daughter, Julie.

Calvin built his family's first house with his own hands from materials salvaged from an old restaurant.

Calvin moved to Chandler in 1960 to provide a healthier environment for his son who suffered from asthma. Calvin and Ilene lived in Camp Verde for the past 15 years.

Calvin was a mechanics mechanic. He disliked the idea of removing and replacing a part when it could be removed and repaired. He worked many years after his retirement as a handyman in the Camp Verde area; providing help to his family, friends, and neighbors.

Calvin was preceded in death by his parents Leonard and Clara Belle Glidewell; his son, Steven Glidewell; his grandson, Adam Uhles, and a brother, Donald Glidewell.

Calvin will be intered in Milan, Missouri. A celebration of Calvin's Life will occur at the family home in Camp Verde at a date to be decided. In lieu of flowers the family suggests donations to a hospice organization of your choice. Bueler Funeral Home assisted the family.