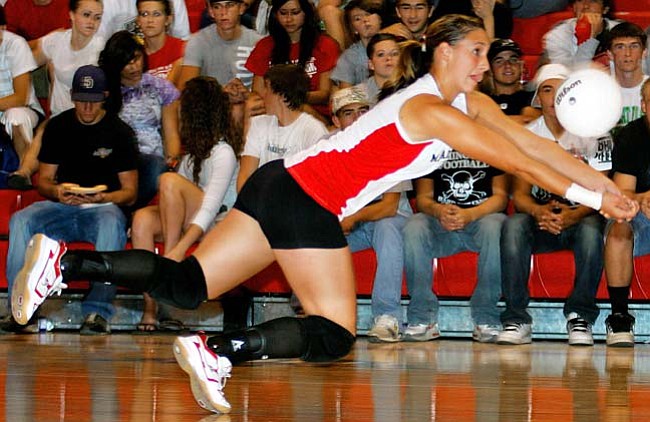 VVN/Matt Hinshaw Cassie Bailey dives for the ball during the match against Page on Saturday.

The Mingus Union volleyball team finished out its regular season schedule with a big game against the Page Sand Devils with the region title up for grabs. Page traveled to Mingus on Saturday and the two teams battled it out through five games. Despite putting up a good effort, the Marauders dropped the match to the Sand Devils, 25-19, 20-25,22-25, 25-13, 12-15.

"It was a game to remember, with the Region Title on the line," said coach Audrey Islas. "But Mingus failed to prevail."

Page claimed the region with a record of 8-2, while Mingus and Flagstaff tied for 2nd with records of 7-3. Sinagua upset Flagstaff on Saturday also, which allowed for the tie for 2nd place. Mingus will be seeded No. 2 in the region tournament (because they are ranked higher than Flagstaff in the Power Rankings). The tournament will be held on Saturday in Page.

"We are fortunate to be high in the rankings for the State tournament," said coach Islas. The Marauders will host the first round of State at home on Wednesday, Nov. 12.

Saturday's game against the Sand Devils was a tough loss for the Marauders.

"We were prepared physically and mentally. We had the momentum going into game five with a 25-13 win in game four. We were up 10-6 and had a couple of bloop plays and some weird calls after that. Everything just seemed to go their way for the last five points of the game. We were stunned. I thought for sure we were going to win that fifth game. The girls were too," said coach Islas.

The inconsistencies in the final points of games this season was something that the team has been working on all season. Although better, they resurfaced in game five.

The Marauders will try to even things out at the Region Tournament this Saturday.

"We have a first round bye, seeded 2nd," said Islas. It's likely we will face Flagstaff in the second round and Page again in the finals. It is our goal to win the region tourney before heading into the state one."

Jill Peterson had a great game against the Sand Devils with three ace serves and 12 kills, her highest on the season.

"She ran some quick plays which kept Page's defense out of her way. Her serving is always tough too. Good job Jill," said coach Islas. "Cassie Bailey and Tessa Fanning each had three ace serves also. We have been working in practice on serving tough. We have definitely gotten better at serving. I was proud of that."