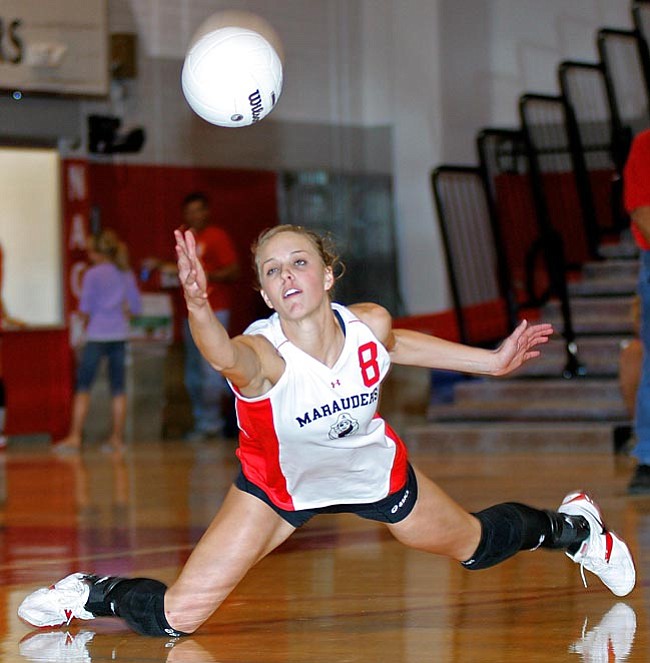 VVN/Matt Hinshaw Heather Rux dives for a ball during the game against Page at MUHS. Rux earned 1st Team All Region honors and was selected as the Grand Canyon Region MVP.

On Saturday, Nov. 8, the Mingus Union volleyball team traveled to Page to take on their region opponents in the Grand Canyon Region volleyball tournament ... and it was an amazing day for the Marauders.

After losing out on the Region Championship to Page on the previous Saturday at Mingus Union High School, the Marauders were out for vengeance. The tournament seeded No. 2 Marauders faced the No. 3 Flagstaff Eagles first.

"We came out somewhat lethargic in the first game and lost miserably 12-25," said coach Audrey Islas.

This however was not how the rest of the day went for the Marauders.

"I told the girls after that first game, that I wanted to spend the whole day in Page and they needed to do something about that," said coach Islas. "If we were going to play like that we would be going home rather soon.

"We were a whole different team the rest of the match, completely dominating," said Islas. "We played the best we have played all season and I was very proud of how we dominated the Eagles."

Page had won their game earlier against the Sinagua Mustangs. So, the stage was set for a rematch with Page. With an hour to wait, the girls rested and stayed focused for the championship match. The Marauders picked up where they left off with Flagstaff, beating the Page Sand Devils in three games, 25-20, 25-15, 25-22.

"We played even better against Page," said coach Islas. "It was like everything finally came together. We were confident, strong, offensive and dominate. I kept telling the team all season that we had the talent to win every match, and all we needed to do was be mentally tough and confident," said Islas.

There was no lack of confidence on Saturday. The hitting was across the board, which made Mingus a threat offensively. Senior setter Kelsey Wokasch kept mixing up the sets and everyone was putting the ball down. The Page defense didn't know where to block Mingus.

"That was really a momentum boost when she [Chavez] was able to block their middles," said coach Islas.

Ortiz had 10 digs; Wokasch and Bailey each had seven.

"Kelsey had an amazing tournament," said coach Islas. "I am so proud of her and how she really stayed focused the whole day. It was very rewarding for me to see my team win a much-deserved championship tournament. I knew we were getting better every week, but I don't think the team knew. They know it now. This momentum is exactly what we need going into the first round of the state tournament."

The No. 6 ranked team in the state, the Mingus Marauders, will face the No. 11 Sahaurita Mustangs at 7 p.m. tonight at home.

If Mingus wins the first round, then they will face the winner of the No. 3 Arcadia vs. No. 14 Flagstaff.

"It's likely to be Arcadia, since they are a dominating team," said coach Islas. "We played them our first match of the regular season. We were not victorious. I told my team then, we would meet them again in the state tournament for revenge. I hope I am right. I would really like to see how we match up with them now."