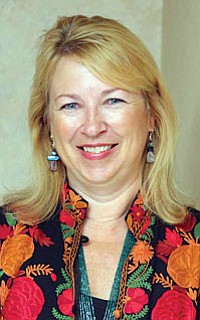 Sedona entrepreneurs and international women's rights advocates Martha Mertz and Mary Schnack will be honored Nov. 10 by the International Alliance for Women (TIAW) with their inaugural World of Difference 100 Award which honors 100 women from around the world who have contributed to the economic empowerment of women.

Both members of the Sedona chapter of the National Association of Women Business Owners (NAWBO), Schnack was awarded in the entrepreneurial category and Mertz in non-profit.

"We received tremendous nominations from every continent in the world, " said Stephanie MacKendrick, president of the Board, TIAW. "We have been inspired and humbled by the stories of these women; leaders of their communities, organizations, regions or countries who, often without fanfare, have taken action to support women's advancement in society and business."

A Sedona resident for four years, Mertz is the Founder of ATHENA International, a non-profit organization that seeks to support, develop and honor women leaders, inspire women to reach their full potential, and create balance in leadership worldwide. Mertz is also a real estate developer and is President and Owner of Mayhood/Mertz Investment, Inc.

A specialist in communications for almost 30 years, Schnack owns a variety of businesses focusing on communications. These include her roles as president of Sedona based public relations firm, Mary Schnack Media Services, Inc., and founder of Up from the Dust, a business that imports products and is dedicated to the global growth of women microenterprises.

To learn more about Mertz or Schnack visit www.athenafoundation.org.