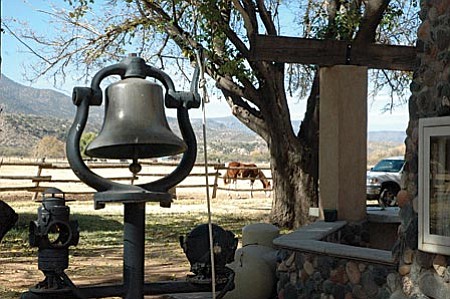 VVN/Steve Ayers The Rockin' River Ranch has been a working horse and cattle ranch since the 1940s, and was once owned by the owner of Mr. Lucky's dance hall and bar in Phoenix.

Chalk up another crown jewel for the ever-expanding Verde River Greenway.

Arizona State Parks and The Nature Conservancy have announced the purchase of the historic Rockin' River Ranch, located on the Verde River at the southern edge of the Town of Camp Verde.

The 209-acre ranch is being described by Arizona State Parks as the southern anchor for the 36-mile long Greenway, with the 320-arce Dead Horse Ranch serving as the upstream anchor.

The parcel includes three-quarters of a mile of riverfront and is just a mile and a half upstream from Beasley Flats and start of a 40-mile stretch of the river that has been designated by the federal government as Wild and Scenic.

The Rockin River Ranch is the second piece of property to be purchased in the expanded portion of the Greenway, the first being a 40-acre parcel purchased in Camp Verde last year. State Parks now holds title to 844.6 acres in the Greenway.

According to State Parks Director Ken Travous, there are no specific plans in place to develop the property and it will not open to the public until after a master plan is developed and put in place.

"That will be ultimately be the responsibility of those who manage the Greenway Project," Travous said.

The property has been a working cattle and horse ranch since at least the 1940's and was once owned by Robert Sikora, owner of Bobby McGee's Restaurant and Mr. Lucky's dance hall and bar in Phoenix.

Legend says that country western music stars Waylon Jennings, Willie Nelson and Glen Campbell, among others, once used the ranch as a getaway.

The Nature Conservancy, a nonprofit with the mission of purchasing, preserving and protecting properties that protect and preserve natural habitats, helped facilitate the purchase of the property.

The property includes an extensive mesquite forest, is part of the critical habitat supporting desert nesting bald eagles and southwest willow flycatcher, and stretches of the river that provide habitat for several species of native and endangered fish.