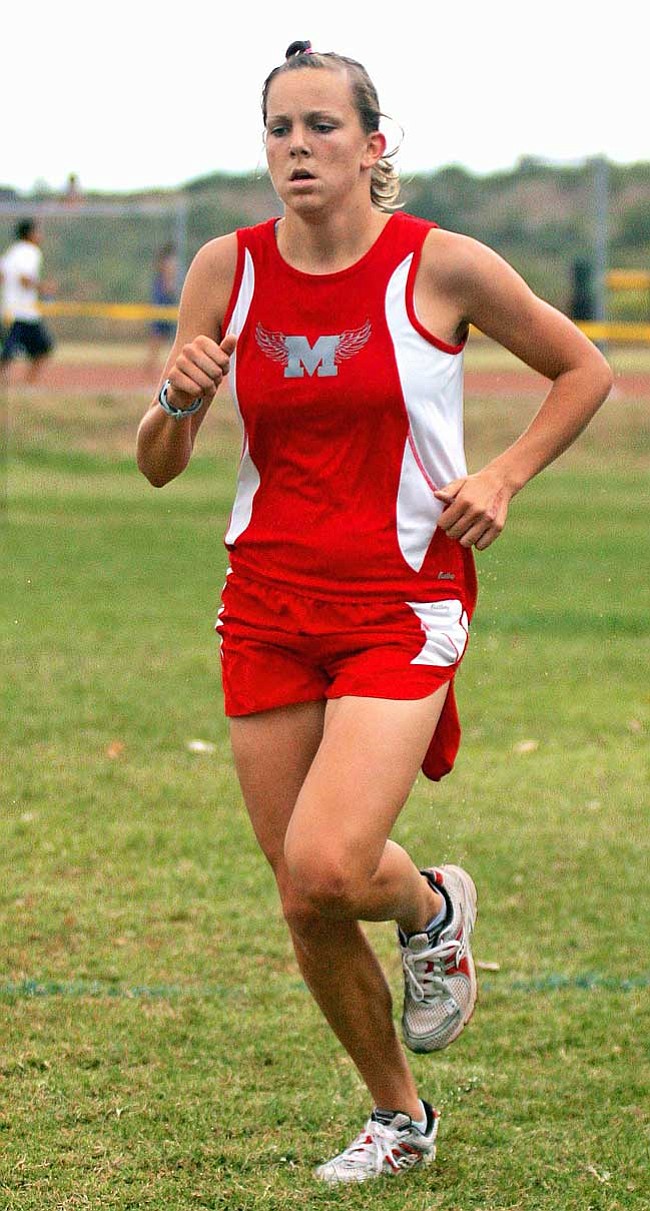 VVN/Matt Hinshaw The first finisher for the Marauders at Mingus’ Invitational, Carly Blair.

The Mingus Union High School cross country team hosted its annual meet in Clarkdale on Saturday and as always the competition was fierce.

Boys freshman race ran concurrently with the boys JV. It game the freshmen an opportunity to be successful - as they usually just run in the JV race while in other sports they have separate freshman competitions.

The Marauders went 2-3-4 in this race with Chris Ortiz leading the way for the Marauders with a time of 19:56. Colin Garttmeier finished third in 20:55 and Paliden Scott finished fourth at 21:56 in the 22-runner field.

"It was a nice start to the day," said coach Jim Bostwick.

"[I was] really shocked by the improvement of the kids who ran here last year," said coach Bostwick "Tanner by four minutes and 22-seconds and Jake by two minutes, 48-seconds."

The girls freshman Des Ortiz led the Marauders with a 4th place finish in 27:02 in the 14-runner field and Alex Henley was right with her in 5th in 27:03.

The boys varsity team won the event for the 3rd year in a row. Boys although happy in the moment know that the effort would not be good enough at the state level, which is what they are shooting for in another month.

Senior Tim Freriks led Mingus with a second place finish in the 78-runner field to defending State Champ Brian Shrader from Sinagua. Shrader won in 16:35, while Freriks ran with his teammates the first half of the race and couldn't close the gap on such a quality runner. Freriks finished with a time of 16:58, which was actually better than his winning time of 17:12 last year.

Junior Wilson Cutbirth finished in 4th place in 17:34 running his usual solid race. Senior Daniel Jaimes finished off his last race in Clarkdale just like he does every year, improving on his time each season - 19:45 freshman season, 19:23, sophomore season, 18:38 junior year and a 18:04 in his last time out to finish up from 12th last year to 7th this year. Alex Stratz finished off his career in Clarkdale with an 11th place finish in 18:43. Freshman Juan Wells is learning each time out and this week ran in16th place in 18:59. It is the fastest freshman time of a Mingus runner in eight years. Sophomore Hunter Rauch was 19th in 19:06.

Mingus won the event with a total of 40 points, followed by Camelback in second with 91. Camelback is currently ranked No. 2 in the 5A II Conference's Coach's Poll. In third place was Sinagua 95, followed by Sedona in fourth and Coconino in fifth place. Newcomer to the sport, Camp Verde, finished 12th out of the 13-team field.

Only seven complete teams competed in the girls' varsity race as most school. There were 60 runners from 13 schools participating in the race.

Casa Grande took first place with 64, followed by Mingus with 84 points, up from 5th place last year. Goldwater tied with Mingus with 84 points, but Mingus won the tiebreaker on the strength of their 6th runner. Mingus' No. 6 runner, Chelsea Ishimoto almost didn't run due to some sore shins, but instead came through to help the Marauders snag the No. 2 spot. Hamilton finished fourth with 112 points, followed by Apache Junction (201), Coconino (202) and Pueblo (212).

Coach Addis was very pleased with the girls' performance on the day.

Senior Carly Blair led way in 9th place overall in 23:21. Sophomore Erin Freriks finished in 12th in 23:42 (two minutes and seven seconds faster for her than last year was the team's most improved runner from last year's race on the girls team). Freshman Torey Braly finished 13th in 23:43, Freshman Emma Schraner finished 21st in 24:28, junior Stacy Hewitson rounded out the scoring in 29th in 25:11.

The Marauders head to Sandra Day O'Connor today for a meet and then the teams have a break until Oc. 17 when they go to the Bud Davis Invite in Tuba City.