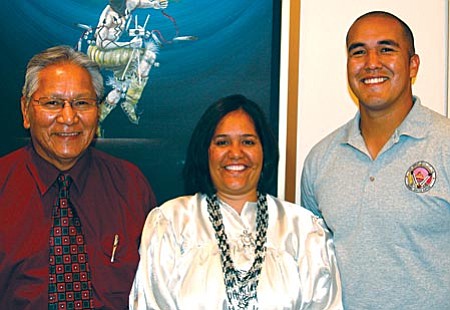 Cora-Lei Marquez, Jon Huey and Robert Jackson Sr. officially join the nine-member Yavapai-Apache Tribal Council as the three candidates with the most votes after the tribal wide elections held on Sept. 20. Each candidate was elected to serve a three-year term.

Re-elected to the Tribal Council was Cora-Lei Marquez, who received the most votes in the election with 100 votes. Marquez is currently employed with the Yavapai-Apache Nation as the W.I.C. coordinator and will be serving her second term on the Tribal Council after winning the Special Election in 2007 to fill a single vacancy.

Marquez said, "It is an honor to be here before you. There will be tough decisions ahead, but as a leader I rely on my community for support and strength."

Huey was re-elected to the Tribal Council with 98 votes. Huey stated, "It has been hard getting to where I am at. I have not yet reached my potential, and I am excited to continue my service on the Council."

Winning the third vacant seat, Jackson had 95 votes. Jackson is a former member of the Cliff Castle Casino Board of Director's and the former chairman of the Nation's CDFI Board of Directors. "I am not here to make drastic changes. I am here to represent the people and continue to do good work on the Tribal Council," stated Jackson.

Vice Chairman Norman Smith said, "I want to congratulate the winners of the General Election. This is a critical time for the Yavapai-Apache Nation and our people. I am confident that the new council members and returning council members will have a strong commitment to the needs and the people of this great Nation. As we face more and more challenges as a government, it is important to have leaders that bring experience and diversity to the council. I look forward to working with each member of the Tribal Council."