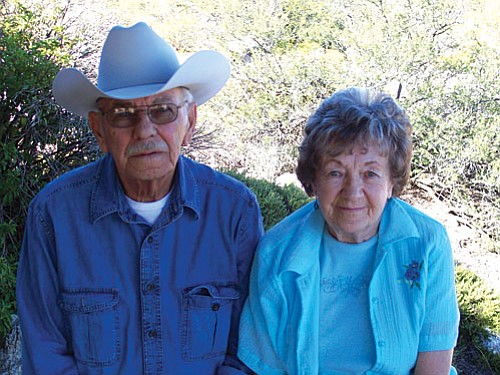 William and Elaine Rogoski celebrated their 60th wedding anniversary this month. They were married Oct. 9, 1948, in St. Gregory's Church in Chicago. They lived in Chicago until 1955 when they moved to St. Charles, Ill. Being an electrician, Bill had the opportunity to start his contracting business in 1968, which is St. Charles Union Electric Co. and is still operated by their son-in-law. After many trips to Arizona, they found enough land to build their ranch in Cottonwood. So in 1982 they brought the horses from Illinois and moved into their new home. Besides caring for the horses, cattle, goats, chickens, cats and dogs they opened an indoor mini-golf course on 89A for a few years until it was bought out by Verde Hay. Since bill was a professional musician, (drums and vibes) some friends encouraged him to start a band and so the Pastimes' was formed with four other local musicians. They played "gigs" around town, up in Flagstaff and Sedona. Their three daughters live in the Midwest. Mary Elaine Murphy (Jeff) lives in Lexington, Ky., Josephine Ann Hopkins (Paul) in Maple Park, Ill., and (Nancy) Marie Boyum (Ken) in Racine, Wis. They have 10 grandchildren and two great-grandchildren.