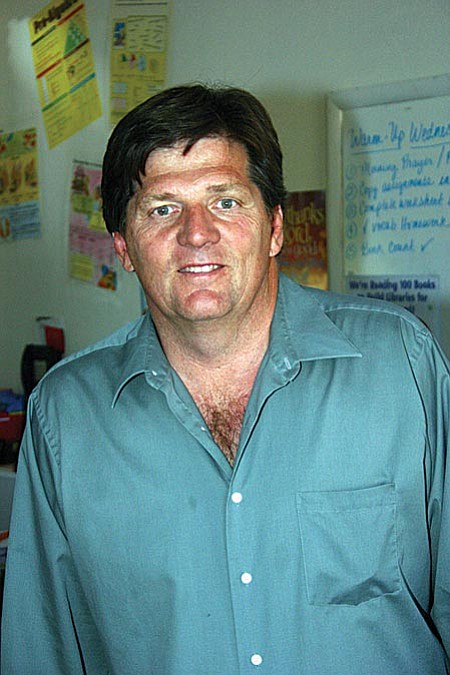 Things are changing at St. Joseph's Catholic School in Cottonwood. New construction has enlarged the size of classrooms, and "Montessori" has been dropped from the school's name.

"St. Joseph's made a transition from last year to this year," said Principal Greg Kirkham. "This year we brought in a new curriculum for first through seventh grades."

The standard-based curriculum affects only those grades. The Montessori system will be kept for pre-school for 3-through-5-year-olds and for kindergarten.

The school, thanks to new construction last year, is also growing.

St. Joseph's takes pride in its small classroom sizes. Kirkham said the largest class has 17 students and the smallest class has 11 students.

But it is probably the curriculum that brings the most important change.

"The curriculum I brought in is called a differentiated curriculum," Kirkham said. He explained that with the new system students are not held back. The school now uses accelerated courses, such as math and reading. A student is not held back by grade level if he or she is ready to accelerate, according to Kirkham.

The number of students grew from 56 last year to 73 this year. The addition of eighth grade will allow the school to grow to 84 students next year. That growth is best demonstrated in the school's new structure of four classrooms compared with the single room when the school opened.

All students were originally taught in the single classroom. Multi-aged classrooms are still used, but first and second is in a single room, third and fourth has it's own room and fifth, sixth and seventh grades are in a separate room.

Kirkham said that most of the additional space from the construction was dedicated to the fifth, sixth and seventh-grade room. The construction also allowed a new principal's office and a new Atrium, a classroom dedicated to specific religious programs based in the Montessori system.

Unlike charter schools, St. Joseph's Catholic School is not free. "There is tuition," Kirkham said. "We're a private school."

That tuition is $4,700 per year, but most students attend on substantial scholarships through the Catholic Tuition Organization of the Diocese of Phoenix. Also, tax credits allow people to redirect up to $1,000 per married family to St. Joseph's.

Kirkham said at least 50 percent of the students receive a $3,500 scholarship. Other scholarships are less, but the lowest scholarship given this year was $2,800.

"The tuition is how we fund this school," Kirkham said.

"Parents do have a choice for a Catholic education for their kids," he said.