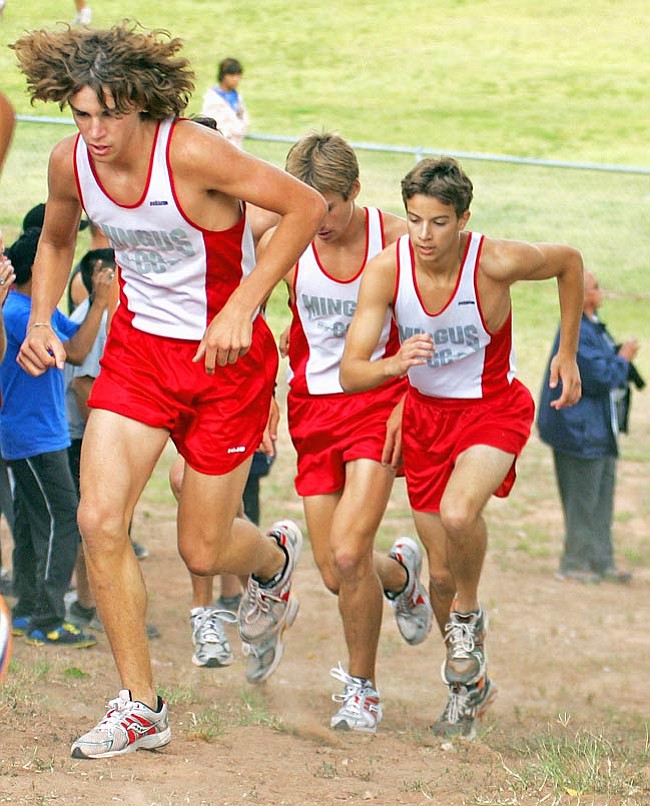 "Sometimes you have to travel a little to find the best competition and this invite fits the bill and is definitely worth the drive to meet some of the best teams in the state," said coach Jim Bostwick. "The teams were mainly 2A and 3A schools but up on the reservation cross country is king and these teams are as good or better than any in the state. On top of that, this is probably the hardest course in the state, very comparable to the Mingus Invite, but with sand on the entire route."

The Mingus boys' JV team finished fifth out of nine teams, let by freshman Colin Garttmeier with his 10th place finish in the 60-runner field with a time of 21:19.

The girls varsity team were hurt by the fall break and couldn't field a full team, but the four runners they had all ran very good races.

Senior Carly Blair (24:29) finished in 15th place among the 70-runner field. Blair was the team's most improved runner from last year by 1-minute, 11-seconds.

"Although there was no team score, it was a trip worth taking for the girls," said coach Bostwick.

The boys varsity team was coming back to Tuba City as two-time defending champions of the event. But this year, the team is different. The Marauders consist of two freshmen, three runners who ran only the JV race last year and two returning scorers from last year's team. All of the runners had a lot of pressure on them, but they handled it well and are starting to make their own identity.

Senior Tim Freriks struck first for the Marauders, crossing the finish line in first place overall in the 91-runner field for the third straight year with a time of 17:21. Freriks finished the course 29-seconds faster than last year; mainly because he was being chased the entire race by the Tuba City duo of Jasson Yazzie and Billy Orman.

Junior Wilson Cutbirth hung on to the main pack to finish in fourth place with a time of 18:01, (46 seconds faster than last year). Then senior Alex Stratz came in 9th in 18:58 and ran one of his best races of his career. In his first varsity Tuba City race, he ran the course 61-seconds faster than he ran in JV race last year.

The Mingus freshmen gained some valuable experience that should pay off in the next few years. Juan Wells was 28th in 19:47 (a time that would of won the JV race) and Chris Ortiz was 43rd in 20:41. The effort was good enough for the Marauders to claim their 3rd straight title, edging host Tuba City 44 to 52 in the 14-team field.

"[It was] A great test for us as we needed a tough race to get us ready for the county race, Grand Canyon region and state races in the last few weeks," said coach Bostwick.

The team will travel to Pioneer Park in Prescott on Wednesday to run in the Yavapai County Multiple at 3 p.m.