MUHS renovation on budget, on schedule
Schoolâ€™s new library will open for next semester 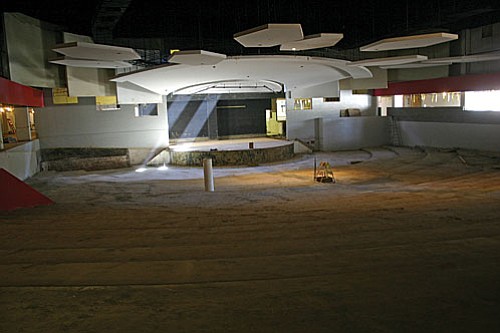 The new auditorium at MUHS still has a lot of work left, but it will be an increase of seats from about 700 up to 950.

The $15 million bond renovation approved by voters in Nov. 2006 for Mingus Union High School is in Phase III, the last of the three planned stages of construction.

"We're on budget," said Steve Blankenship, who oversees the project for MUHS. "We're on schedule."

The add-ons -- a sort of wish list if funds were available - are still on the table. Some of those have already been added, some completed. Remodeling the girls locker room was one of those, and it is done. Renovating or replacing the gymnasium floor was another, and, thanks to the generosity of APS and the Phoenix Suns, that was one of the earliest projects completed.

"We'll start moving the front office and library in during Thanksgiving break," Blankenship said. "The library won't open to students until January."

Other possible add-on projects still possible according to Blankenship include new sod on the football field, an all-weather track and renovation of the teachers' workroom.

Interim Superintendent Nancy Alexander explained that although local taxpayers are paying for the construction through the bond, certain construction items still must meet requirements of the School Facilities Board and the Americans with Disabilities Act. She said the new library now meets the SFB and ADA standards.

The auditorium will have 950 seats, compared with about 700 for the old auditorium. The stage will be larger, new lighting will be installed, and the entire backstage area is being remodeled.

Blankenship says it will all be done, on time, by July 15. "We'll be done in plenty of time for next year."

MUHS board gives go-ahead on Phase III
Mingus renovation under budget, ahead of schedule
Letter: We're seeing light at the end of the tunnel
It's time for Phase II at Mingus Union
Lights Out!