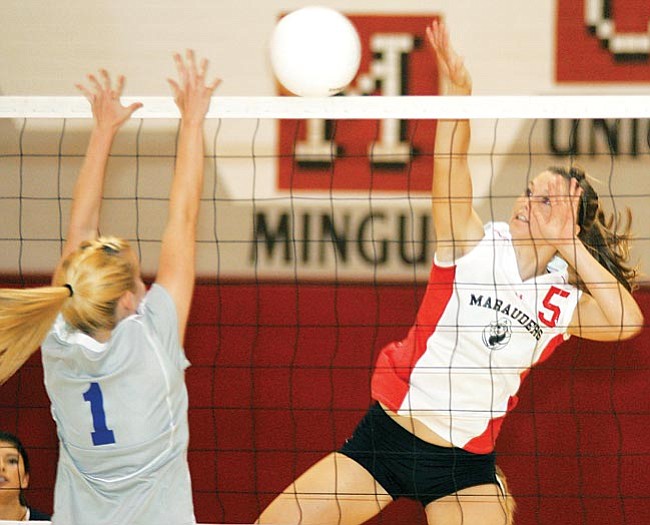 VVN/Matt Hinshaw Mingus’ Jill Peterson slams the ball over the net for a kill during the game against Sinagua.

The Mingus Union volleyball team has been on a tear over the past couple of weeks since beating region rival, Flagstaff on Oct. 14. The Marauders downed the Sinagua Mustangs on Oct. 16 at home, then crushed the Coconino Panthers on Oct. 21 in Flagstaff.

Although Mingus was not on top of their game against Sinagua it was still and important region win. The Marauders played much better against the Panthers, beating them in four games.

"It was good to see us finally start to close out games like we should," said coach Audrey Islas. We also had some other hitters step and do well. Jill Peterson had a great game against Coconino. "She is doing much better at the outside hitting position as well as running the middle quick in some rotations," said coach Islas.

Peterson had a season-high of nine kills. She also served well again and had one ace serve. Heather Rux proved strong in kills with 10 and two blocks.

"She is a strong server who can place the ball every time and had an ace serve also," said coach Islas. Outside hitter Molly Westcott is getting more confidence. "She had six kills out of 17 attempts. We would like to get her the ball more. We still need to get stronger at the outside hitting position going into the state tournament."

Chelsea Chavez had six kills and five blocks. Kelsey Wokasch serves well all the time and had three ace serves on the night with 32 assists. Sabrina Ortiz remains strong at the Libero position. She had 19 digs.

"We are getting more consistent with our passing, especially on serve receive," said coach Islas. "That is going to be very important in the post season as well."

On Thursday night, the Marauders returned home to take on the Bradshaw Mountain Bears. The Marauders had no trouble taking care of business, beating the Bears in three straight games, 25-20, 25-12 and 25-13. The team also honored its seniors: Chelsea Chavez, Amanda Miskiel, Heather Rux and Kelsey Wokasch.

Mingus is 11-4 overall and 6-2 in region play. The Marauders take on the Page Sand Devils on Nov. 1 in their final regular season game. This will be a big game for both teams as the winner will take the No. 2 spot in the region, behind Flagstaff. Currently the Marauders are ranked No. 7 in the Power Points.