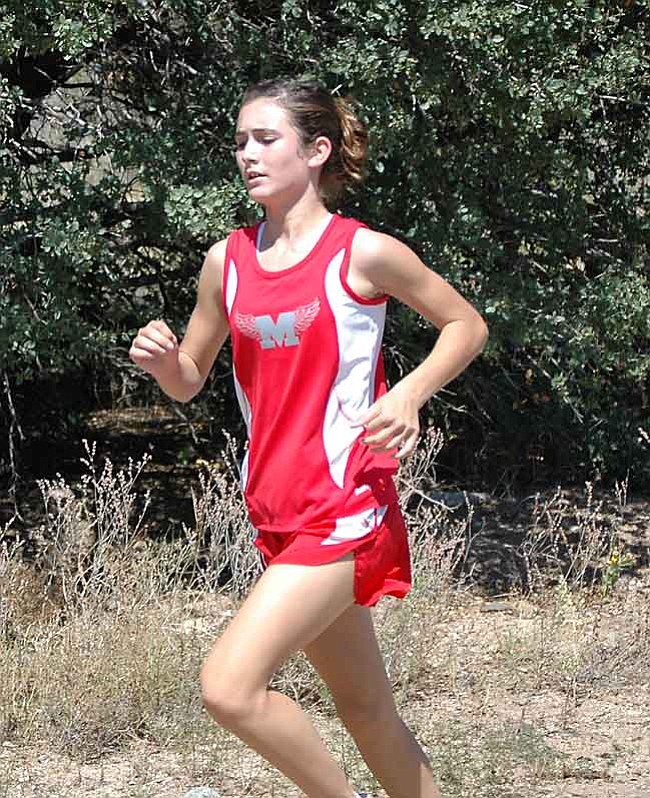 The Mingus Union Cross Country team ran in its first meet of the season at the Ray Wherley Invitational at Embry-Riddle University in Prescott on Saturday.

It was a 'different' meet to start year, with lots of races. Each athlete on each team ran against corresponding athletes on other team - so seven varsity runners, seven races, seven against seven, six against six, etc. Finally all the No. 1 runners ran against each other at end of day. Not only that but usually in normal meet just five out of a team's best seven score and by place, not time.

Well at this race, all seven runners' time added up and low time wins the team competition. This event was mainly where the heart soul of a team - the middle pack kids who scrounge for points all year - get a chance to run up front against their peers.

In the boys race all seven runners counted and the Marauders' No. 6 and No. 7 were two new freshmen to the team, so they were a little nervous, but both passed with flying colors.

"It was a nice start to his career," said coach Jim Bostwick.

Freshman Juan Well then raised the bar by winning his No. 6 race. Coach Bostwick had no idea how he would run.

"Evidently he is going to be one of those athletes who run as fast as it takes to win," said coach Bostwick. Well finished the course in 17:48.

Then the heart and soul of the Mingus team, who never usually get a chance to win races, took the opportunity and literally ran with it. The Marauders won every race of the day. Sophomore Hunter Rauch, the No. 5 runner on the team finished in 17:23. Senior Alex Stratz in the No. 4 race finished in 16:59. Senior Daniel Jaimes in the No. 3 race, finished in 16:38. Junior Wilson Cutbirth led the No. 2's race with a time of 16:28 and senior Tim Freriks won the No. 1's race in the day's fastest time of 15:40, defeating defending State Champ Brian Shrader of Sinagua in another of their many memorable races.

The girls' races were run simultaneously with the boys' races. The consistent Marauders snuck into the top five overall, finishing in the No. 5 spot out of 16 teams.

None of girls won their respective races, but they all finished in top 10.

"This was our best finish in recent memory here," said coach Bostwick.

"That made the day for us," said coach Bostwick with coach Addis. "It was just a real solid team effort by the new freshman running varsity and the returners who all improved their times from last year."

The cross-country team laces up again on Saturday for the Four Corners Invitational in Flagstaff.