What a Night! First Copper Town Ball a raving success
Historical Society says it’s a go for next year 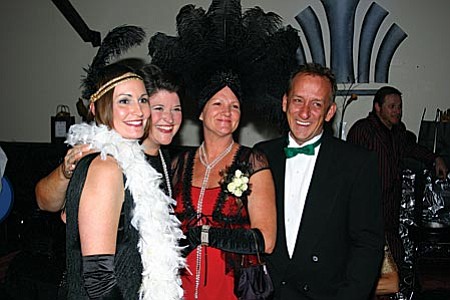 He said the people he talked with who have attended such events in other places all said Jerome's was no comparison. People are already promising to buy tickets to next year's ball.

It's highly likely they'll get the opportunity. "Most definitely," Kinsella said about doing it again.

"We had a few wrinkles," he said, "but you always have that with the first one. It came out better than we ever anticipated. We didn't hear anything bad."

Kinsella said more than 200 people attended the event. "The ticket sales covered the costs of putting it on," he said. The cost of the event was about $10,000. "The income from the bar will go to the Jerome Historical Society with some to the Jerome Chamber of Commerce.

"We really appreciate all the support we got from the outside," Kinsella said. He said Arc Lighting and Jack Rappaport, along with businesses and restaurants in town, really stepped up to help out.

"They made the event a success," Kinsella said.