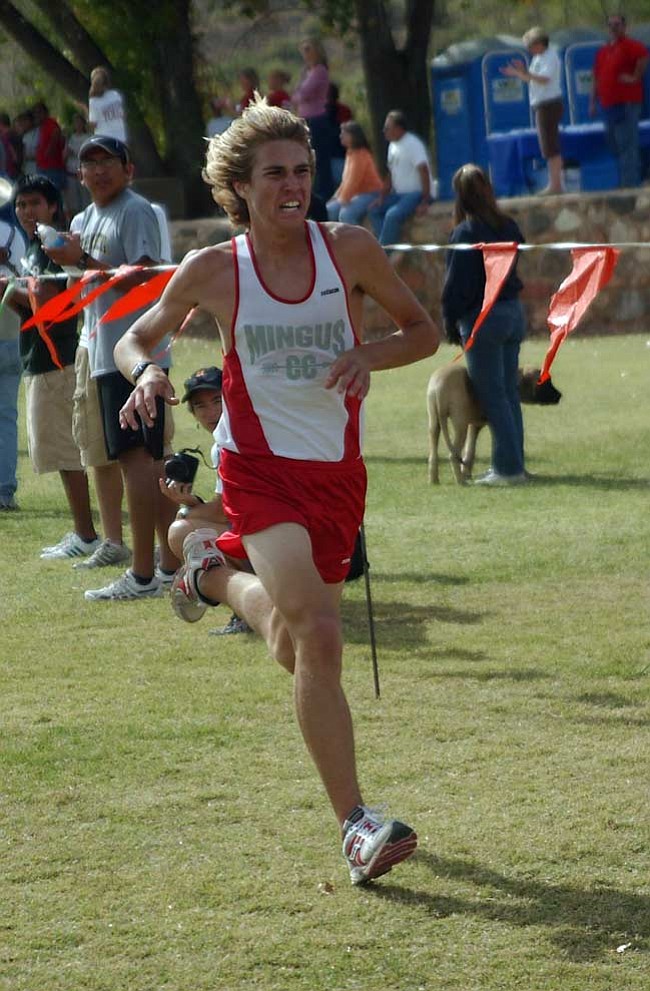 The boys varsity team won the 29-team event. Mingus finished with 50 points, followed by Tuba City in second place with 127 points and Chinle with 137.

"The boys ran a super effort after a tough week of training," said coach Jim Bostwick. Senior Tim Freriks finished second overall in a time of 16:05 in the 172-runner field. This matched his 2nd place finish to Sinagua's Brian Shrader over the past two years.

Junior Wilson Cutbirth moved up to fifth from 10th a year ago with a time of 16:20. Senior Daniel Jaimes finished ninth after finishing 15th last year. Senior Alex Stratz finished 12th in 16:50 after winning the JV race last year and Sophomore Hunter Rauch is making an excellent adjustment to running varsity after finishing second in the JV race last year, he finished 22nd this year in 17:18. Freshman Juan Wells ran 17:51 (a time that would of won the JV race this year) in 46th place.

"In such a big race, it was hard to tell during race how they did," said coach Bostwick. "They felt they didn't place well but we told them they did excellent because they had such tight pack and when results came out it showed the Marauders were 6th out of 18 teams with 201-points. Conference foes Flagstaff (38) and Page (84) finished first and second respectively.

Leading the ladies was Senior Carly Blair in 32nd place in the 132-runner field in 21:54. Freshman Torey Braly ran 22:01 in 38th place, a time that would won the JV, much like Juan Wells on the boys side, Braly and fellow freshman Emma Schraner, who would have placed 2nd if they wanted to run JV race, opted to run the varsity race.

Sophomore Erin Freriks was 45th in 22:11, Schraner was 46th in 22:13, junior Staci Hewitson finished 68th place in 23:06. Hewitson was the team's most improved Marauder from last year by running almost two minutes faster. Junior Chelsea Ishimoto was right behind in 72nd place in 23:12.

"It was a great performance for the predominantly 1st year runners," said coach Bostwick.

The Marauders head to Page for an invitational on Saturday at 9 a.m.