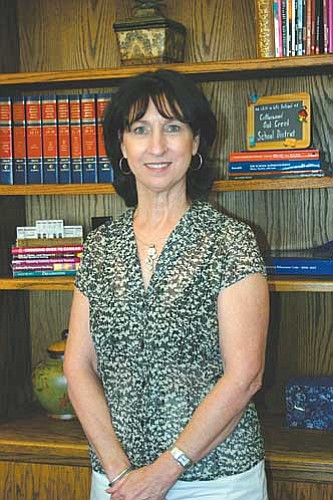 On Tuesday, State School Superintendent Tom Horne sent a message to Arizona school districts asking them not to panic. His message said some school districts have overreacted to budget-cut estimates. Horne was trying to reassure school administrators with his take on how the federal stimulus package will help offset the state's budget cuts to education.

Another $1 billion goes to Gov. Jan Brewer. Of that billion, $185 million will be used at the governor's discretion, and $831 million will go to "backfill" cuts in state funding to K-12 education.

That's a lot of money, and it raises the question of how Horne's message might affect local school districts' budget planning.

Barbara U'Ren, superintendent of Cottonwood-Oak Creek School District, said her district's budget planning "will be based upon what we hear coming out of the state Legislature. We cannot build a budget upon possibilities of having stimulus funds "backfilled" into the state budget. We must first plan as if there will be no additional monies added to the state's coffers."

"Two million will be about a 20 percent reduction in our M&O budget," U'Ren said. "With cuts as deep as this, we are looking at a number of possible solutions.

"We have eliminated several administrative positions and will look at possible reductions or restructuring of departments and reductions in salaries.

"In addition," U'Ren said, "we are considering restructuring of student support programs and increases in class sizes."

U'Ren said C-OC is hoping to receive verification of the stimulus monies that will help maintain some teaching positions.

Kirk Waddle, business manager for Mingus Union High School District, said Horne's message is a positive one, in general. "According to his memo, we wouldn't be facing the Draconian cuts next year. But I think it would just put it off until 2011."

Responding to the stimulus package's money for special education and Title I, Waddle said, "These measures target small populations in our school, but they are very expensive populations."

Horne's message warned districts about sending out reduction-in-force notices to teachers. He said that maybe those teachers won't be laid off, but the morale of the teaching staff could be seriously damaged.

Waddle said April 15 is the deadline for sending those RIF notices to teachers who have three years or less time on the job. If the notices are not sent, then those teachers cannot be laid off.

May 15 is the deadline for the district to give notice of a cut in pay to teachers if that is what the school board decides it must do. Waddle said that is a possibility.

At this time, MUHS District expects its General Fund revenue to be down next year by $572,000, but, with everything considered, Waddle says the total shortfall will be more than $800,000.

He said $450,000 of that comes from losses in the average daily attendance records. The MUHS enrollment is down by 30 students, a result, Waddle believes, of the construction industry basically drying up in the area.

For now, Waddle said he is still working on the budget based on the information that's available now.

Kathleen Fleenor, superintendent of Clarkdale-Jerome School District, said she is "very skeptical." She said that one problem with the federal funds is that districts are not allowed to use the money to supplant. That means districts cannot use the money to cover a position or program that is currently funded.

"We can only use the funds for new positions or new programs or to expand a program or position," Fleenor said.

"Several of us have met with Rep. Ann Kirkpatrick to try to loosen those regulations, but I have not heard of any progress.

"That being said, any funds will help."