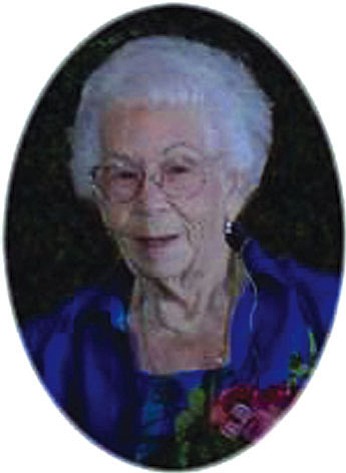 Lorene Kelton Petersen, long-time resident of Pinedale, died April 3, 2009 in Snowflake. Born August 11, 1914 near Meyers, Arkansas to John C. and Alma Knox Kelton, she came to Arizona in 1923 when her father was transferred to McNary, Arizona with the Cady Lumber Corp. from McNary, Louisiana. Lorene was only nine years old at the time and this trip sparked a love of adventure and travel which she enjoyed all of her life. The family lived in McNary, Williams, Flagstaff, Grand Canyon, Pinedale and Standard.

While living in Standard, she met Louis Petersen who worked in a grocery store owned by Louis's sister and brother-in-law, Ella and Brown Capps. It was not long before the two were dating and courting, which led to marriage in 1930.

They began their married life in a cabin on the Petersen Ranch at Standard, three miles south of Pinedale. Louis became involved in the lumber business hauling for local mills and others. In 1942 they had just finished remodeling their home in Pinedale when it was destroyed by fire. The family had lost everything in the fire, but the community of Pinedale came to their aid with food, clothing and shelter. The family moved to Tucson where Lorene went to work at Consolidated Air Craft as a lathe operator helping in the war effort. The next year they moved to Show Low where they leased the Show Low Motel. Then the family purchased the Goodman Sawmill at Wolf Mountain in Vernon and moved there. A new mill was later constructed at the Vernon Crossroads where they also operated the small store.

The Vernon mill was sold and a mill in Cottonwood in the Verde Valley was purchased and so the family moved again. The mill prospered and another mill was established in Prescott. In 1971 Louis and Lorene retired and returned to the ranch south of Pinedale. Lorene was very active in the Church of Jesus Christ of Latter-day Saints holding many positions in the Church as teacher and leader. She served with her husband as a missionary in South Carolina in 1977-78.

Lorene's greatest love was her family. She left a legacy of family history research including two major books about her ancestry, one of which was given recognition by the Tennessee Historical Society as the best family history book of the year. Research on her family took her to all parts of the southern U.S. as well as Scotland, Ireland and England.

She was preceded in death by her parents, John C "Bud" and Alma (Knox) Kelton and all nine of her siblings: Andrew, "Ed", Murvel, Evelyn, Christine, JC, Dorothea, Donald, and Louise.

Her husband died in 1996 but she is survived by all of her children: Leon and wife Evelyn (Heydorn) of Utah, Dale and wife Bonnie (Dickinson) of Florida, Niel and wife Edith (Neininger) of Germany, Donna and husband Austin Johnson of Yuma, James and wife Karen (Ragsdale) of Pinedale, and Mary and husband Eugene Webb of Snowflake. She was proud of her 22 grandchildren; 70 great-grandchildren and 18 great-great-grandchildren.

Visitation will be held from 6:00 to 8:00 P.M., Friday, April 10, 2009 at Owens Livingston Mortuary - White Mountain Chapel, 320 N. 9th Street in Show Low, Arizona. The Funeral service will begin at 2:00 P.M., Saturday, April 11, 2009 at the Pinedale Ward Chapel of The Church of Jesus Christ of Latter-day Saints (between the communities of Pinedale and Clay Springs) on Highway 260, where an additional visitation will begin 1 hour prior. She will be buried at the Pinedale Cemetery right beside her Eternal Companion.

For those who have special memories and would like to send private condolences or sign our online guest book, we invite you to visit our website at www.owenslivingstonmortuary.com