A Capital Idea: A wrong turn may have decided Verde Valley's fate 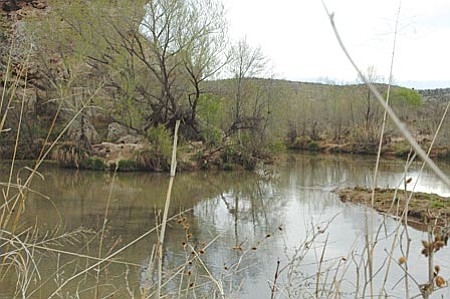 When John Goodwin arrived in Arizona in the winter of 1863, he had much on his mind.

As Abraham Lincoln's appointee for governor of the newly created Territory of Arizona, Goodwin was saddled with several responsibilities, not the least of which was the organization of a civilian government.

As a former politician and political appointee, Goodwin understood the politics that went with the territory.

He if anyone understood that the biggest question was not who was running things, but from where they would they be run.

He knew that government is a boon for any community. It meant money, jobs and in the case of fragile communities on the outskirts of civilization, permanency.

Several communities felt they deserved to be Arizona's territorial capital.

By all rights Tucson would have been the first choice. It was one of the oldest and had the largest population.

There were also two communities along the Colorado River, La Paz and Yuma. Both had river access, were thriving trade centers and just as importantly, were at the center of a large gold strike.

As it turned out, on his way to Arizona, Goodwin stopped off in New Mexico. While assembling a military escort, Goodwin was given some advice by Gen. James Carlton, military commander of the Department of New Mexico.

Carlton cautioned the governor against going to Tucson. It was a hotbed of Confederate sympathizers and Mexicans, neither of which respected his authority.

Instead of going all the way to the Colorado River, Carlton suggested stopping first at some new "diggings" in the vicinity of the upper Hassayampa River.

Carlton told Goodwin he had recently established a military outpost north of the gold fields called Fort Whipple to protect its civilian population from Yavapai and Apache raids.

When he arrived on Jan. 22, 1864, Goodwin discovered the fort's location at Del Rio Springs lacked the water, timber and agricultural resources he felt necessary to establish a seat of government.

Before he was fully unpacked Goodwin began organizing an expedition in search of better digs.

The miners south of Del Rio were doing well. Placer gold had been discovered on Lynx Creek, Groom Creek and Big Bug Creek. But it was not the bonanza most prospectors believed was awaiting discovery.

Rumors had circulated for some time that Arizona's mother lode was not in the mountains surrounding what would later become the community of Prescott.

The mother lode, as well a rich agricultural land and abundant water and timber was to the east, likely along the Verde River, possibly the Salt River, or possibly somewhere in between.

Goodwin also wanted to keep the fort and the capital together. So he proposed an expedition to find "a more suitable place for the permanent location of Fort Whipple and for developing the agricultural resources of the country."

He also sought, "on the part of the citizens designing to accompany the party, the punishment of Indians that had been committing depredations on the settlements."

His plan was to check in on the mines and placers south of Del Rio, then proceed east to the Verde River, down to the Salt River, then on to the Gila to the Colorado. This, he figured, would cover all his options.

After visiting the local mines, Goodwin joined up with a party of 84 men, composed of civilians, military escort and government officials. They left King Woolsey's Ranch in Lonesome Valley (present day Dewey) on Feb. 21.

Among the adventurers were mountain men/guides Pauline Weaver and Joseph Walker, discoverers of the Prescott area gold fields. In spite of wandering about Arizona since the 1830s, neither knew where they were going as they headed east-southeast toward the Verde.

Governor Goodwin was accompanied by one of his associate judges, Joseph Pratt Allyn.

Allyn, Chaves and a civilian believed to have been James Sheldon would leave accounts of the trip. All three told of a disappointing journey that forever removed the Verde as a spot to establish a capital.

The ill-fated journey began when the party descended one of the most difficult and dangerous entries into valley -- Chasm Creek, where only by luck and pluck was the party able to escape without a fatality.

It took two days to descend into the valley, as the party of men and pack animals were constantly challenged by "falling trees, huge boulders and rolling stones."

Once down the defile, which Goodwin labeled "Cascade Canyon," the party was forced to stumble over more boulders, fallen trees and other obstacles before reaching the river.

"We proceeded to the bank and camped -- the Verde here is a fine rushing stream, some fifty yards wide and not fordable," Allyn wrote. "It is dammed just below with driftwood.

"We have struck the river in the canyon between the upper and lower valleys, and it will be difficult to get out."

To add to their troubles, the party found itself engaged in a run-and-shoot skirmish the next morning with a small party of Indians. For those who had come to kill Indians, it would be their only chance of the trip. They killed five, including a mother and her infant.

In return, the Indians would kill one of theirs, Pvt. Joseph Fisher, who will go down as the first military fatality from Fort Whipple.

Following the skirmish, the party struggled its way upriver, out of the steep and narrow central canyon, finally entering the open and broad Verde Valley on or about Feb. 28.

"We followed the upper valley some 20 miles to where it forks, one stream coming from Bill Williams [upper Verde River], the other from San Francisco mountain [Oak Creek]," Allyn wrote. "The general characteristics of the valley are similar to the Rio Grande.

"With irrigation it could yield as the Rio Grande. There is grama grass on the mesas on the west side, and large timber...within 20 to 40 miles. There is not the slightest sign of minerals of any kind on the river thus far."

But the toll on men, animals and supplies forced the party to cut its Verde Valley visit short.

Over the course of the next few week, members of the abandoned trip headed back to Whipple. Those who came to kill Indians, those who came for gold, and the governor, looking for a place to call home, went home empty.

Governor Goodwin would make it as far as the confluence of the Salt and Verde rivers before packing it in, never to return.

Although the expedition would fail as far as most interests were concerned, it would provide the first glimpse into valley's possibilities as well as its dangers.

What cannot be overlooked, also, is how the fate of the expedition played such an important role in the valley's future.

Had the party gone straight east from Woolsey's Ranch they would have reached the divide between the Agua Fria and Verde River watersheds further north at Copper Canyon instead of Chasm Canyon, a far easier route into the valley.

Had they not expended so much horsepower, manpower and provisions descending the canyon and working their way to the upper valley, they may have been inclined to ascend the river further.

Had they gone farther upriver they may have discovered the blue stone outcroppings opposite the Verde's confluence with Sycamore Creek -- the outcroppings that marked central Arizona's only true bonanza, the Jerome mines.

And, had Goodwin's party discovered those mineralized ledges, along with the abundant grass, water, timber and agricultural possibilities that already lay before their eyes, the Verde Valley may have been a completely different place.