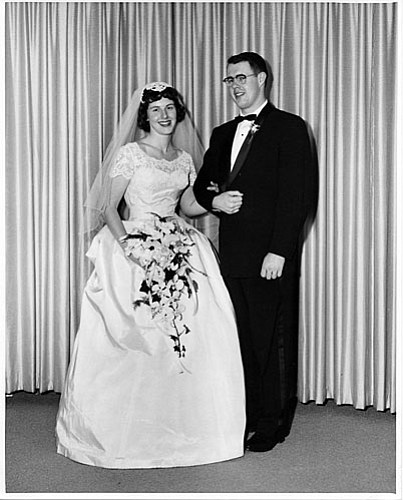 Connie and Sam Morey of Cottonwood recently celebrated their 50th wedding anniversary with a family dinner party at a local restaurant. Attending: Daughter Debra (and Noah) Stalvey, granddaughter Amanda & grandson Adam from Flagstaff, and daughter Diana (and Daniel) Jeffrey from Tucson. Unable to attend: Daughter Donna (and Jeff) Dill and granddaughters Kristen Garrison and Sarah Mercer from Washington State. The Moreys were married March 31, 1959 in New Jersey while on spring break from Duke University. They spent their honeymoon in Washington, DC during cherry blossom time. Having both graduated in June 1959, Connie began her 40 year career as a Registered Nurse and retired as a Nurse Practitioner specializing in Adults/Geriatrics. Connie is Member of The Honor Society of Nursing, Sigma Theta Tau International.

Having completed his military service as a Special Agent, U.S. Army Counterintelligence Corps, Sam then was an investment banker prior to moving his family to Tucson in 1977. He retired as a securities, real estate, mortgage, and insurance broker.