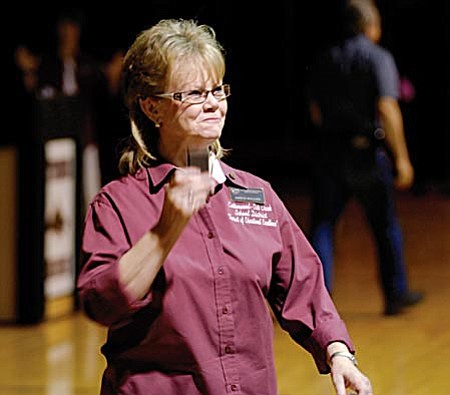 Janice Rollins gives out recognition pins for 25 years of service to the Cottonwood-Oak Creek School District at Friday's assembly.

Superintendent Barbara U'Ren said the district restructured its administrative team to save money. That was made a priority when the district had to cut more than $1 million from its maintenance and operation budget due to cuts in education by the state.

Frazier has been the coordinator of the district's English Language Learners program for more than five years. "She will do both special education and ELL," U'Ren said.

U'Ren said that move saved the district one administrative salary along with the district's reduction in assistant principals.

The district lost Stacy Kramer, dean of students at Tavasci Elementary, to cancer, and Mary Valenzuela, assistant principal at Cottonwood Elementary, has retired after more than 30 years with the district.

The district will not replace, at this time, a counselor who retired, and the district also reduced its nursing staff from five positions to four and half.

"All schools will have RNs as the nurses have created a plan to assure that the medical needs of our children are met," U'Ren said.

She said the district will evaluate the reduction in these positions and will gauge the state's roller-coaster budget to see where the district stands.

Back in May, the district gave reduction-in-force notices to 26 teachers, but 11 of those were brought back.

U'Ren emphasized that core subjects will not suffer because they will be taught by highly qualified and certified teachers. She also said that because of a drop in enrollment, class sizes will be only minimally affected.

Other reductions in the district include a technology instructor, two custodial positions and one and a half aide positions.