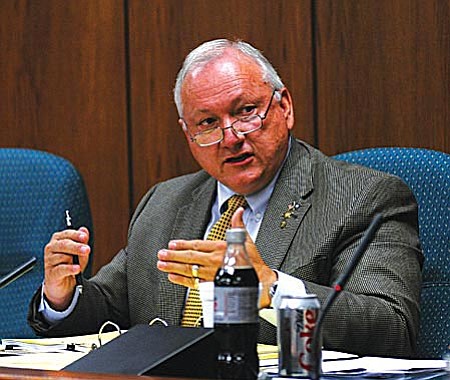 Capitol Media Services photo by Howard Fischer Sen. Russell Pearce explains elements of the latest budget plan during a Thursday hearing of the Senate Appropriations Committee which he chairs.

PHOENIX -- Senate Republican leaders are trying to cobble together the votes for the budget package they negotiated with Gov. Jan Brewer after the session collapsed Friday when several of their members refused to go along.

The biggest hurdle for Senate President Bob Burns and the governor is finding the necessary 16 votes for the most controversial feature of the plan: putting a measure on the ballot asking voters for a three-year surcharge on the state sales tax.

GOP Sens. Pamela Gorman of Anthem and Ron Gould of Lake Havasu City have publicly declared their opposition, leaving no wiggle room for anyone else in the 18-member GOP caucus to waver.

And Sen. Carolyn Allen, R-Scottsdale, was home with an injured leg.

So desperate was Brewer to get the plan approved Friday that she walked to the Senate for a 90-minute closed-door meeting with Gorman.

"And I said, 'Sen. Gorman, I need your help,' ' Brewer continued. "And I felt that she listened, and I hope that she will.'

But Gorman went home instead. And the Senate -- along with the House which did approve the package Friday -- is not set to return until Tuesday.

Even if Burns gets 16 votes for that piece of the package, that doesn't solve the problem. Other lawmakers have different issues.

For example, Sen. Jay Tibshraeny, R-Chandler, refused to support another bill in the package because one provision would reduce the tax burden on businesses for future voter-approved school and local bond issues and overrides. Tibshraeny, a former Chandler mayor, said he tried to convince colleagues giving that break to companies is a bad idea, not just from a public policy perspective but politically

"If they're going to end up paying less, their constituents are going end up paying more,' he said. But without Tibshraeny, Burns can't get that bill approved either, at least not for the moment.

Burns said he remains hopeful he can line up some combination of 16 Republicans for each of the 10 bills in the package.

But that's not his only problem: Several lawmakers who support the package have travel plans made months ago, before anyone knew they would be in session in August. That includes Senate Majority Leader Chuck Gray, R-Mesa, on a cruise through the end of this coming week.

"So we're going to have to match the list (of who supports each piece of the package) with the available bodies,' Burns said.

The Senate president said that, at some point, he may have to concede he cannot get the package approved with only Republican votes. That would require reaching an accommodation with Senate Democrats who until now have solidly refused to vote for any element of the plan.

Democrats don't like the tax hike referral, and not only because some are uncomfortable with using sales taxes paid by consumers to balance the budget. Republican leaders also packed that same bill with other goodies to convince their own party members, who oppose tax hikes, to go along.

One would permanently repeal the state property tax. That levy, suspended in 2006 when there was a surplus, returns automatically this fall absent legislative action.

Democrats say it's not fair to try to raise up to $1 billion a year in sales taxes from consumers while giving away $250 million in property taxes which affect businesses more than homeowners.

Another element of the same bill would cut the corporate income tax rate by 30 percent beginning in 2011. It also would trim individual income taxes by 6.6 percent which, given the graduated tax rates, means a bigger dollar drop for those making more money.

Assistant Minority Leader Rebecca Rios, D-Apache Junction, said her 12-member caucus could provide votes for referring the sales tax hike to the ballot, but only if Burns and Brewer agree to forego tax cuts, at least until the economy gets better. She said they also would have to pledge to use the money raised from the sales tax surcharge -- up to $1 billion a year for two years and half that the third -- for education and "crucial social services for children.'

That, however, could lose far more Republicans than the Democrats it picks up.

Sen. Russell Pearce, R-Mesa, said the only reason he supports the sales tax referral is because of the tax cuts which, if the measure is approved, would take effect regardless of whether voters approve or reject the ballot measure. Pearce said most Republicans see lower taxes, especially on business, as the best way to stimulate the economy by convincing people to invest and expand here.

The question now is how quickly to push ahead.

Brewer and Burns have been pushing to put the tax question - and a separate measure ask voters to let lawmakers alter voter-approved laws -- on the Nov. 3 ballot. That day was selected because, as the first Tuesday in November, it is a day people would understand about going to the ballot.

And they had been working under the premise that Friday was the deadline to make that date. But Deputy Secretary of State Jim Drake said that, after talking with the suppliers of paper for the legally required ballot brochures, he can stretch that another six days -- to Thursday -- but no longer.

That could pave the way for an election later in November or even December: Lawmakers are legally free to set a different date for the election, as long as they comply with other provisions of state and federal election laws.