Lawmakers' backs to the wall on state sales tax proposal 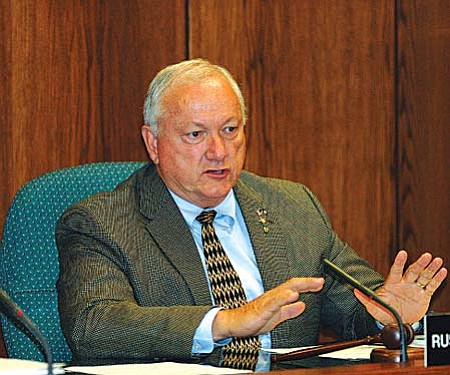 Capitol Media Services photo by Howard Fischer Sen. Russell Pearce, R-Mesa, votes Monday to send a measure to hike the state sales tax to voters but said he will help lead the charge to convince them to reject the measure. Pearce said only by killing the plan will lawmakers get the message to cut spending.

PHOENIX -- State lawmakers are in a race against time in their effort to put a sales tax hike on the Nov. 3 ballot.

The Senate Appropriations Committee voted 6-3 Monday to put the question of a three-year increase to voters. But the Senate adjourned without final action on the latest version of the plan.

But Sen. Carolyn Allen, R-Scottsdale, told Capitol Media Services she intends to stay home today. Allen, who hurt her knee, said her doctor told her that she risked permanent injury or needing surgery if she moved around too much.

Burns said he had not heard that.

How much more time lawmakers have remains murky.

Secretary of State Ken Bennett had said last week his office needed to know by first thing this morning exactly what lawmakers intend to put on the ballot.

But by Monday, Bennett said he could give legislators a bit more time if they agree some temporary changes in state election laws.

Most pressing, he said, is the deadline for supporters and foes of this ballot measure -- and another one asking for permission to alter prior voter-approved mandates -- to file statements that would be included in the publicity pamphlets that have to be mailed out ahead of the election to 1.7 million households with registered voters.

As the measure was approved by the House, that deadline is now past. Bennett said the legislation would need to give people at least until Friday to craft those statements.

"At some point here, we are denying or potentially denying the citizens their right to express their opinion,' he said.

Beyond that is the requirement for early ballots to go out 26 days before the election to those who want to vote by mail.

Bennett said if lawmakers don't act today, the only way to have the tax hike proposal and a related measure on the Nov. 3 ballot would be to shorten the time period for getting those early ballots into the hands of voters, perhaps to just 15 days before the election. But Bennett said that could effective disenfranchise Arizonans in the military or overseas: It may be impossible to get the ballots into their hands and back to Arizona by election day to be counted.

At some point, though, the window closes for a Nov. 3 vote. Burns said his next choice would be the following week.

But Maricopa County Elections Director Karen Osborne said Monday that can't happen. She said the machines, which will have been used Nov. 3 for local and school board elections, cannot be reprogrammed for a new election until all deadlines for recounts and challenges have passed, making the earliest opportunity for a vote Dec. 8.

Much of what has been done so far has been to please Allen.

The proposal approved by the House had the question of the sales tax referral in the same bill as future cuts in corporate and individual income taxes. On Monday, the Senate split the two issues, allowing Allen to support the tax referral while voting against the tax cuts she said are unacceptable to her.

But Allen said it's not that simple, noting the issues remain linked: Only if lawmakers approve the tax cuts would voters get a chance to decide if they want a 1 cent surcharge on the state's 5.6 percent sales tax for 2010 and 2011 and a half-cent surcharge in 2012. And the plan is set up so that those tax cuts, including a 30 percent decrease in corporate income taxes, would take effect even if voters ultimately reject the sales tax hike.

Allen said the tax cuts eventually -- and permanently -- would reduce state revenues by $650 million a year. By contrast, the sales tax referral pushed by Gov. Jan Brewer would raise $2.5 billion over three years before disappearing.

Two of the 18 Senate Republicans already have vowed to vote against the sales tax referral. That makes Allen's vote necessary if Burns is to get the plan, which already has been approved in concept by the House, out of the Senate.

There is another option: seek votes from Democrats.

Sen. Albert Hale, D-Window Rock, acknowledged Monday he was approached by Brewer to see if he would support the tax referral.

Hale would not disclose what Brewer offered as an inducement. He did say, though, he was open to negotiations to finally get the budget resolved.

Senate Majority Leader Jorge Garcia, D-Tucson, said it is not surprising that Brewer was trying to pick off one or more of the 12 Democrats who, to this point, have been united in their opposition to the package. Garcia said, though, he doubts any of his members would be willing to provide Brewer the votes unless substantial changes are made in the plan.

Garcia said the most logical solution would be for Burns to approach him to see how the package can be modified to pick up perhaps all 12 Democratic votes, leaving the Senate president with the chore of finding only four Republicans. But the Democrats want to kill the idea of future tax cuts, at least for now, a move which might not be able to get even four Republicans to support.