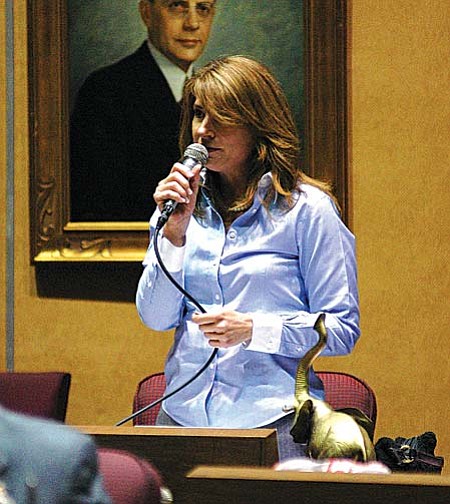 Capitol Media Services photo by Howard Fischer Sen. Pamela Gorman, R-Anthem, voted Wednesday against putting a measure on the Dec. 8 ballot to let Arizonans decide whether they're willing to temporarily hike sales taxes. Gorman said even putting the issue before voters is ``irresponsible.'

PHOENIX -- An effort to finally enact a compromise plan to balance the state budget blew up Wednesday as Senate Republican leaders could not line up the votes for the key provision demanded by Gov. Jan Brewer: asking voters if they're willing to temporarily hike the state sales tax.

The defeat came despite efforts by Senate President Bob Burns, R-Peoria, to convince one of the 12 Democrats to support the tax referral. He needed that vote because two of his 18 Republicans were opposed and Sen. Carolyn Allen, R-Scottsdale, who was not a sure vote for the plan anyway, was absent.

Despite the failure to give Brewer what she wants, the Senate went ahead and approved the rest of the bills in the budget plan, which already have been approved by the House of Representatives. And House Speaker Kirk Adams, R-Mesa, citing a recent Arizona Supreme Court decision requiring legislative leaders to send already approved measures to the governor, told Capitol Media Services he has no real choice but to give those bills to Brewer.

That, in essence, would give the governor the same package she vetoed last month as "fatally flawed."

Brewer later agreed to support the plan $600 million in new spending cuts, including taking $220 million in state aid to education, but only if lawmakers would put a proposal on the ballot for a one-cent hike in the state's 5.6 percent sales tax for 2010 and 2011 and a half-cent hike in 2012. Brewer said that would give voters a chance to restore some of the funds that had to be cut when the recession sharply cut tax collections and created a $3 billion gap between revenues and expenses.

The package Brewer will get also includes permanent repeal of the state property tax.

That levy was suspended for three years in 2006 in a deal between Republican leaders and Democratic Gov. Janet Napolitano. But it is set to return this fall without legislative action.

Brewer agreed to forego the $250 million the property tax would raise as part of the deal for that sales tax referral and the chance to generate $2.5 billion during the next three years. Now, however, she will get only the tax cut.

The governor would not say what she will do when the package, minus the tax referral she desperately sought, hits her desk. Instead, she issued a prepared statement criticizing legislative foes of the plan.

"They have so little trust in the voters that they would once again delay the passage of a sound state budget, and deny the people the opportunity to protect critical funding for education, public safety, and care for our most vulnerable citizens," her statement said. "Their actions are irresponsible, create an increasing cost to state taxpayers and, if not resolved quickly, will do irreparable harm to our families and our economic future."

Brewer will have five days from the time she gets the bills to decide what to do with them.

The failure of the sales tax referral, in turn, killed any chances of passage of another bill, which would cut corporate income taxes by 30 percent beginning in 2011, with a 6.6 percent cut in individual income tax rates. That measure was procedurally linked to the tax referral: It would take effect only if voters were first given the chance to boost sales taxes for three years.

Sen. Russell Pearce, R-Mesa, who agreed to Brewer's demand to send the sales tax issue to the ballot -- though he vowed to vote against it when it got there -- said he's not sure much more can be done.

"You can't make people vote her way," he said.

"We've been here a long time trying to get the governor her package," Pearce continued, lining up Republican votes by including the future tax cuts. But even with that, he said, "you can't get there."

Senate President Bob Burns, R-Peoria, said that, at some point, it may be necessary to tell the governor this is as good as the package gets.

"I haven't put it in exactly those words," Burns said.

"But I have told her numerous times through the session that I felt there was a very likely chance that we would not be able to get the votes for the referral," he continued. "I felt that way all session long."

Sen. Rebecca Rios, D-Apache Junction, the No. 2 Democrat in the Senate, already started firing salvos in Brewer's direction to warn her against signing the budget she rejected last month. Rios even read from the governor's veto message complaining about the "devastating cuts to education, public safety and our state's most vital health services for the frail."

"If the governor signs this budget, she's turning her back on the very people that she proclaimed to protect," Rios said.

"She will have done nothing for education or Arizona's most vulnerable populations," Rios continued. "Rather, when the governor signs this budget she will show that she is just another politician who cannot be trusted and who will lie to Arizona voters."

But Rios acknowledged that she -- and at this point, all the other Senate Democrats -- would not have supported the package even with the sales tax referral.

Part of it stems from the belief that sales taxes are regressive and hit those in lower income brackets proportionately harder. But part of it was Brewer's agreement to demands by some Republicans to sign $400 million a year in permanent tax cuts into law if they sent the measure to the ballot, regardless of whether voters actually approve it.

The two Republicans who refused to go along with the majority on sending the tax hike to the ballot said they had their reasons.

Sen. Ron Gould, R-Lake Havasu City, pointed out the link in the package between asking voters to hike sales taxes and the promise of future tax cuts, regardless of whether the ballot measure is approved. He was particularly critical of one element which would reduce corporate income taxes by 30 percent.

"To my voters, this is a tax increase," he said. "You're shifting corporate taxes onto the backs of the consumer."

Sen. Pamela Gorman, R-Anthem, called it "irresponsible" to even give voters the option to hike sales taxes, saying that would depress the economy and slow any recovery.

Burns, who supported the entire package, including the tax referral, said he brought the tax referral plan up for a vote because he thought he had the commitment of Sen. Richard Miranda. He said Miranda had agreed to vote with Republicans, though Burns would not detail what he offered the Phoenix Democrat, suggesting that information would have to come from Miranda.

But Miranda left the Senate before the roll-call vote on the measure to put the proposed one-cent increase before voters on Dec. 8, leaving Burns one vote short of what he needed. Miranda did not return messages seeking comment.