The Zin Is In: Valley wineries begin the 2009 harvest 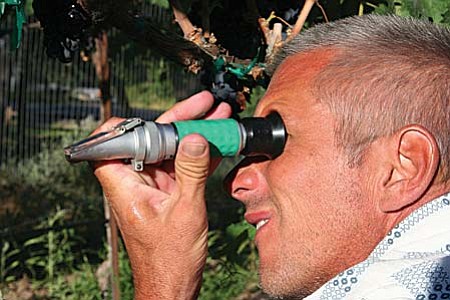 VVN/Steve Ayers Javalina Leap vineyard manager Chris Turner tests the sugar content of the grapes throughout the harvesting using a refractometer. The device measures sugar in degrees brix, with the ideal being between 25 and 27 degrees for the zinfandel grapes.

PAGE SPRINGS - Plenty of sunshine and a lack of monsoon clouds has brought on an earlier-than-normal harvest for most valley winemakers.

Wednesday, Javalina Leap Winery became one of the first vineyards in the area to bring in their grapes. For owner Rod Snapp, this year's crop also marked the first year he has been able to harvest his four acres of zinfandel grapes.

"It's an exciting moment for us. Four years of waiting is over. I can't wait to taste the final product," Snapp said.

Vines can take up to five years to produce fruit of sufficient quantity and quality for winemaking.

His final product will also be among the first estate-bottled wines in the valley, the first coming from Fritas Vineyards in Cottonwood. Fritas is also harvesting later this week according to Chris Turner, vineyard manager for both Fritas and Javalina Leap.

Estate bottled wines are ones produced entirely from grapes grown in a particular vineyard. In previous years, virtually all grapes used by local wineries were brought in from southern Arizona and California.

Snapp has produced estate bottled Barbera wine in the past, harvested from the vineyard of his business partner and neighbor next door. That wine took a first place this year in the Whole Foods Consumers Choice Awards.

Snapp's initial harvest on Wednesday brought in just over a ton of grapes.

"I have to give a lot of credit to Chris (Turner) and his partner Nikki Check. They have done a fabulous job with the vineyard. It's one less thing I have to worry about," Snapp said.

According to Turner, the weird weather and the mix of microclimates within the valley have led to a disjointed harvest.

"We are harvesting reds along Oak Creek and in Cottonwood. But there are some varietals that still have a ways to go," Turner said.

Alcantara Vineyards on the Verde River also began harvesting three varietals this week, but the bulk of their crop is a couple of weeks away, according to winery owner Barbara Predmore.