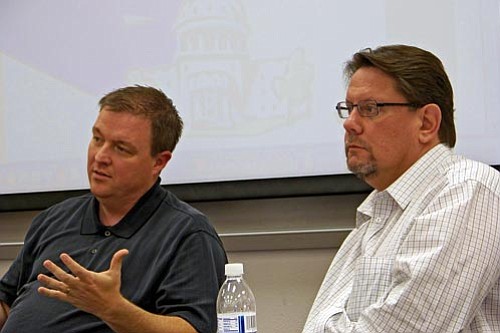 Tom Belshe and Dale Weibusch provide information at the meeting.

VILLAGE of OAK CREEK -- Two staff members of the League of Arizona Cities and Towns spent a couple hours at the regular meeting of the Big Park Regional Coordinating Council Thursday to update the council on the methods and requirements to incorporate the community.

Outgoing Council President Dorothy O'Brien said the council was asked by the Yavapai County Supervisors recently why the community had not incorporated since Big Park may be approaching "build-out."

Some members see the council as having been snubbed by the county in its attempt to update the Big Park Community Plan. Yavapai County, faced with budgetary issues, has pared back its local planning efforts.

Whether or not the planning and incorporation are related, O'Brien said it has been almost 10 years since incorporation was last investigated (2000) and it seemed timely to investigate how the Big Park community now feels.

She told the gathering that the meeting was only to get information from the League and then another assembly could be called in January or so to debate this issue, if council members are interested.

Deputy Arizona League Director Tom Belshe told the gathering he was "not advocating that you become a city," but only to provide factual information.

Belsche and Dale Wiebusch, the Legislative Associate for the League, spelled out the legal requirements for incorporation, through either the petition process or by an election. A petition incorporation would require signatures of two-thirds of registered voters, and the election process is by-passed. A simple majority of people would have to approve an incorporation election.

An incorporated community must have a population of at least 1,500 and essentially be "urban" in nature. He used the figure of 4,000 as a "conservative" estimate of Big Park population and said he believes both requirements are met.

Belsche urged the use of a municipally-trained attorney to provide a legal description. He said that is "important to do correctly" and where many communities slip-up.

The City of Sedona must give its permission to allow the incorporation, under law, since it is within the minimum mileage of a future community's boundaries.

League staffers showed a breakdown of $1.4 million in revenues, that a community of 4,000 could expect, which included shared revenues, highway user fees, a portion of the state sales tax and vehicle license taxes.

The breakdown was created for Williamson Valley, north of Prescott, which is considering incorporation. But the League officials noted that residential community does not have a good retail base to provide sales tax revenues. "You pretty much have to have a sales tax," Wiebusch emphasized. "It is your most important source of revenue."

"Don't get sucked into a depending upon a construction sales tax to cover expenses, like some fast-growing communities have," said Belsche . That revenue source has recently dried up.

A city or town must provide police services and administration. Typically a new town will contract with the Sheriff's Office for police protection, until it develops its own force.

"That is the most expensive part of the budget, usually 40-50 percent," Belshe said. A town clerk is the "face of the town," but it is also common to hire a manager, have an attorney and secure liability insurance.

Choosing to incorporate is a point of view, said Belsche. He encouraged a "friendly civil discussion," but warned the topic often creates conflict between viewpoints. The decision depends is "based upon an expectation of services, whether you want more police protection or a higher level of land use planning."

Questions from the floor included queries on bed taxes and how to "un-incorporate."

The gathering was told that a mix of uses makes a better community. League members were asked about the success of the transient occupancy tax on timeshares.

They told the questioners 8-12 percent is a typical percentage of a communities' costs of administration, though a newly incorporated community often rises as high as 25 percent.

Start-up costs can vary, according to Belshe, who said Sahaurita started up with town hall in the clerk's home. Star Valley used the Fire District station house.

Revenues will not start until a "certified population is determined" by a census and often a community will have to "pass the hat" until revenues are available.

Belshe suggested that incorporation occur in the fall, so that the town government starts with the beginning of the fiscal year in the summer when more revenues begin.