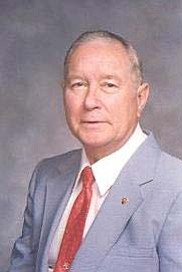 Clement Leroy Dieter, 86, of Clarkdale died December 8 at the Veterans Administration Hospital in Prescott. He was born April 29, 1923 in Sparrows Point, Maryland, the son of Henry Frederick Dieter and Rosa Ella Bissell.

He was a graduate of Sparrows Point High School and attended technical school.

An Army veteran of World War II, he served as a staff sergeant in the famed 1st Division (“the Big Red 1”), A Battery, 397th AAA Battalion. He received the Good Conduct Medal, the American Theater Ribbon, the European African Middle Eastern Ribbon and the World War II Victory Ribbon.

Mr. Dieter worked for Bethlehem Steel for 33 years and Clarkdale School for 10 years.

He was a member of the Jerome Lodge of Elks in Clarkdale, VFW Post 7400, Dundalk (Maryland) American Legion and the Normandy Veterans Association and the Mountain View United Methodist Church. He was a volunteer in their Angel Tree program.

He loved football, baseball and was a member of the Gem and Mineral Club.

His grandchildren were always special in his heart and his family remembers him with “You’re in our hearts Dad! What a blessed grandpa you have always been! You showed all of us the true meaning of love and selflessness”.

A visitation will be held Monday December 14 in the Westcott Funeral Home at 12:30 PM followed by a funeral service at 1 PM. Burial will be in the Valley View Cemetery.