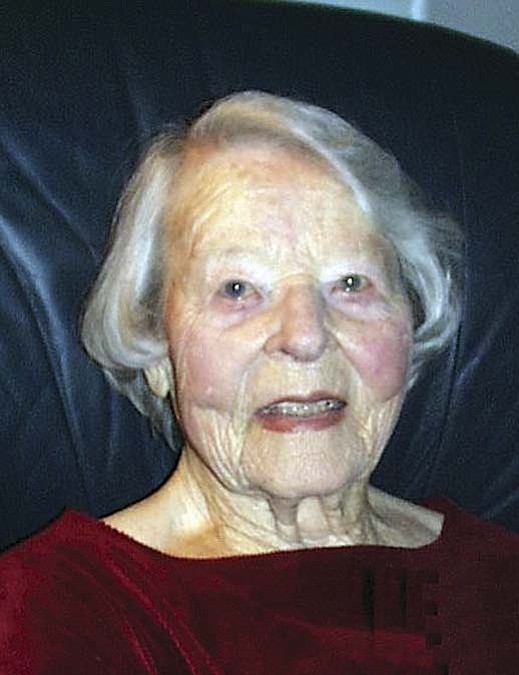 Margaret Jekel, age 101 years, died peacefully on December 14 at her home in Cornville with her family around her. Margaret was born October 7, 1908, in Anderson, Missouri to W. Ed and Bertha Dunn Roark, the fifth of eleven children.

She graduated from the University of Missouri and taught high school physical education before marrying Dr. Louis G. Jekel in 1933. Margaret and Louie moved to Phoenix in 1938, where she was active in many local charities, among them Medical Auxiliary and Girl Scouts,  as well as being a wife and mother.

After her husband’s death, Margaret moved in 1972 to her home in Cornville, which had been the family’s summer home since 1950.

Many family members, friends, and children’s friends have wonderful memories of their visits to Margaret at “the ranch.” She was always willing to extend her hospitality and help to anyone who wanted or needed it. She was also active in local groups such as Audubon Society, Republican Women’s Club, University Women, and Westerners hiking group.

Margaret was predeceased by her husband Louis Jekel and her daughter Judy Cienfuegos, as well as all ten of her brothers and sisters.

She is survived by her son Louis Jekel, Jr. and his wife Karen of Scottsdale and Alexandria Bay, New York; daughter Ginny Barrett and her husband Chuck of Cornville; son-in-law Michael Cienfuegos of El Cajon, California; five grandchildren and six great-grandchildren; and numerous nieces and nephews, and their children and grandchildren.

There will be a visitation on Thursday, December 15 from 5-7 p.m. at Westcott Funeral Home in Cottonwood; burial with a graveside service will be Friday, December 16 at 1 p.m. at Greenwood Memory, Van Buren Blvd at 27 Avenue in Phoenix.

The family suggests that in lieu of flowers, donation sin her memory may be made to the Northern Arizona Hospice, 269 S. Candy Lane, Cottowood, AZ 86326 or to the