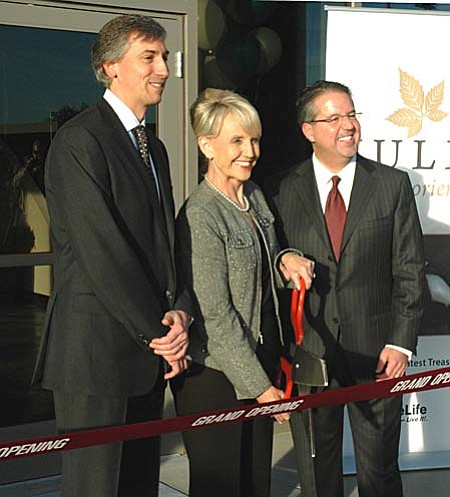 Gov. Jan Brewer on Tuesday participated in a ceremonial ribbon cutting for the new headquarters of a nutritional supplement company. Brewer wants a special legislative session Thursday on the budget but said she was not intending to ask Democrats what they need to support her plan for a sales tax referral. (Capitol Media Services photo by Howard Fischer)

PHOENIX -- Gov. Jan Brewer ordered lawmakers back to the Capitol on Thursday to deal with the budget deficit even though she doesn't have the votes for her plan.

Brewer said Tuesday she has been told by House and Senate leadership that they have corralled the necessary support from Democrats to push through legislation putting a temporary sales tax hike on the ballot this spring. Those Democratic votes are necessary because some Republicans will not vote for the plan.

Only thing is, Democratic legislative leaders said those votes are not there -- at least not yet and maybe not ever.

House Speaker Kirk Adams, R-Mesa, confirmed that late Tuesday, saying he told the governor himself that he could not produce the necessary votes.

Despite that, Rep. Kyrsten Sinema, D-Phoenix, the No. 2 Democrat in the House, said neither Brewer nor Adams has agreed to sit down with party leadership to negotiate.

Adams said he has been conversing regularly in recent days with Democratic leaders.

That isn't the case with Brewer, though. She said Democrats know from prior meetings with her what she wants.

And what of what the Democrats want? Brewer ignored the question, getting into the back seat of her state car, closing the door and being driven off by her security detail.

Sinema said while party members agree with Brewer that more money is needed to deal with the $1.6 billion deficit, they will not provide the votes unless the package addresses Democratic needs.

"Democrats believe that the way to get the revenue we need to protect schools and kids is to start cracking down on some of these loopholes we have for big corporations and the rich,' she said. That includes dealing with the fact that most services and many products are exempt from the state's existing 5.6 percent sales tax.

Sinema, acknowledging the need for quick action, said Democrats might be persuaded to support some kind of simple temporary tax hike. Brewer wants a one-cent increase for three years which could generate close to $1 billion a year.

But Sinema said that can't happen unless and until Republicans -- including the governor -- sit down to talk with the Democrats.

"If they're interested in negotiating, we are there, we are ready.' And she said it would be helpful if the governor herself reached out to the Democrats.

Sen. Rebecca Rios, D-Apache Junction, Sinema's counterpart in the Senate, said she was "stunned' by Brewer's assertion that her party members would just go along with what she wants.

"For the governor to assume that she's got Democratic support to get these things through is foolhardy, it's premature,' Rios said.

"She's making a big assumption,' she continued. "And we all know the old adage about assuming.'

One thing Democrats wants, Rios said, are assurances that any money raised from the one-cent increase will go to keep priority programs alive.

But the problems go deeper than that. Rios said Democrats don't like other measure Brewer and Republicans want to put on the ballot: Asking permission to divert money now being raised for other voter-approved purposes.

That includes the First Things First program for early childhood development programs financed by an 80-cent-a-pack tax on cigarettes. A 1998 constitutional amendment now protect those dollars from being raided.

The proposal seeks to let legislators take half of what that fund has on hand, plus half of the $150 million a year the levy raises in future years.

It also could let legislators take money from a 2000 sales tax hike earmarked for education, as well as possibly trim parts of the state's health care system.

"We have some members that are rightly concerned about potentially giving these Republicans access to the only semblance of a safety net that would be left when it comes to education and health and human services,' Rios said.

Separately, Republicans are crafting another measure for the special session, this one to cut another $150 million in spending, on top of $300 million taken from the budget just last month.