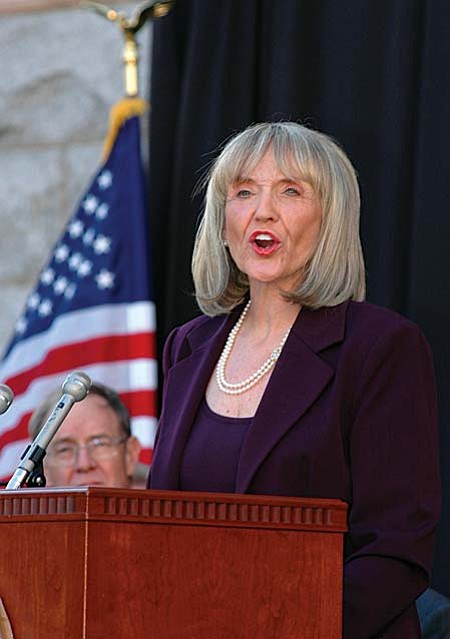 PHOENIX -- The state may be teetering on financial collapse.

But that didn't keep Gov. Jan Brewer from taking the time Wednesday to officially declare Arizona a Christmas -- and Hanukkah -- safe zone, at least for state workers.

In a formal executive order, Brewer said any executive branch agency that reports to her cannot stop employees from "personally celebrating' either holiday. That includes putting items "traditionally associated' with the holidays on their desks.

She similarly barred those agencies from stopping state employees from wishing others either a "Merry Christmas' or a "Happy Hanukkah.' And Brewer said state agencies cannot participate in any "censorship of the lawful celebration and acknowledgement of Christmas, Hanukkah or any other recognized religious holiday.'

The governor, who already faces opposition in next year's Republican primary, said her move was necessary.

"State and local officials in Arizona (and elsewhere) in the past have attempted to strip both Christmas and Hanukkah of their meaning,' Brewer wrote in her order.

She pointedly referred to the fact that Janet Napolitano, her predecessor, had referred to the decoration in the lobby of the Capitol tower as the state's "holiday tree.' And in 2001, when Napolitano was attorney general, her office put out a memo listing "acceptable seasonal decorations' in common areas, including snowflakes, icicles, garlands, poinsettia plants and wrapped presents -- but not trees under which gifts could be placed, or Santa himself.

Less clear is where Kwanzaa fits into Brewer's order.

Brewer has permitted a Kwanzaa display in the lobby of the Capitol, next to the Hanukkah menorah and near the Christmas tree. And gubernatorial press aide Paul Senseman called it "a significant holiday tied directly to Christmas,' saying the language in the order was specifically designed to be inclusive.

"You will be inaccurate if you suggest otherwise,' Senseman said.

But the "Official Kwanzaa Web Site' quotes Maulana Karenga, a professor at California State University at Long Beach and listed as the "creator' of the holiday, as saying that is not the case.

This isn't Brewer's first instance of mixing religion and government.

In a September speech to pastors of the Missouri Synod of the Lutheran Church, she said "God has placed me in this powerful position as Arizona's governor' to help the state weather its troubles.

She also said there are times when, during a meeting with staffers, one will suggest praying about an issue.

"And we stop, and we take that time, and we pray about it,' Brewer, a Missouri Synod-Lutheran herself, told the group. "And it does make a difference.'

Her order does not include the courts, the Legislature or agencies, which have their own elected officials like the Arizona Corporation Commission or the Attorney General's Office.