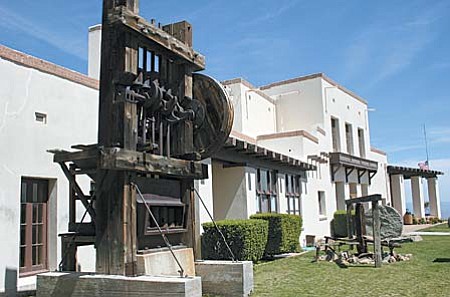 Mike Rollins, manager of the Jerome State Historic Park, said work has been started on the stabilization project. But he doesn't know how budget decisions, such as HB 2001, will ultimately affect the local park.

JEROME - If passed, House Bill 2001 would just about kill any hope that the Douglas Mansion in Jerome State Historic Park will reopen within the foreseeable future. In spite of work continuing on the stabilization project to the mansion, the current news reports regarding the budgets for conservation funds, including State Parks, predict that most, if not all, state parks in Arizona may be forced to close.

Although the state parks board originally targeted Jerome State Historic Park for closure due to budget constraints, when it finally closed - suddenly - on Feb. 26, the parks board gave "maintenance and repairs" as the reason.

Tom Pitts, president of the Jerome Chamber of Commerce, said in a recent interview, "When they shut it down, that was the excuse. Most of us thought it was a ploy."

Pitts, along with the chamber, the Jerome Historical Society and officials at town hall, were all surprised when the park closed so suddenly. Most people involved locally assumed that the town would have time to come up with some proposals of its own to help keep the park open.

Pitts had put together a petition of more than 3,000 signatures of Arizona residents. He included with the petition a fact sheet based on a 2007 study by Northern Arizona University on the economic impact of Arizona's state parks.

That study showed that nearly 2.3 million people visited Arizona state parks in 2007, spending more than $162 million. The Jerome State Historic Park generated more than $7 million in income for Yavapai County. The total visitors to the park near Jerome was more than 60,000 in 2007, with 72 percent of them coming from out of state.

A Dec. 17 press release from Arizona State Parks says HB 2001 will sweep $9.2 million from conservation funds. The release states that these sweeps would force closure of state parks, resulting in an additional loss of $266 million in revenue to the state.

Reese Woodling, chairman of the Arizona State Parks Board, said the bill would reduce the department's remaining 218 employees by about 75 more. That step, Woodling said, would force park closures.

Two weeks ago, in an interview with The Verde Independent, Pitts was somewhat optimistic. He pointed out that the work on the stabilization project to one section of the Douglas Mansion was in fact underway. He said bricks for the adobe walls were to be made on site, and the target date for completion was July 4, with a fallback completion date at the end of July.

On Wednesday, Mike Rollins, manager of the Jerome State Historic Park, said work has been started on the stabilization project. But he doesn't know how budget decisions, such as HB 2001, will ultimately affect the local park.

"I really have no idea," Rollins said.

He said a recent storm wiped out the work that had started on the adobe brick.

"They're still shooting for the work to be done by mid summer," Rollins said.

But that doesn't mean the park will reopen just because the project is completed. Rollins said he has no information on when the park might reopen. He said he can't see the Jerome State Park opening if other state parks are closed.