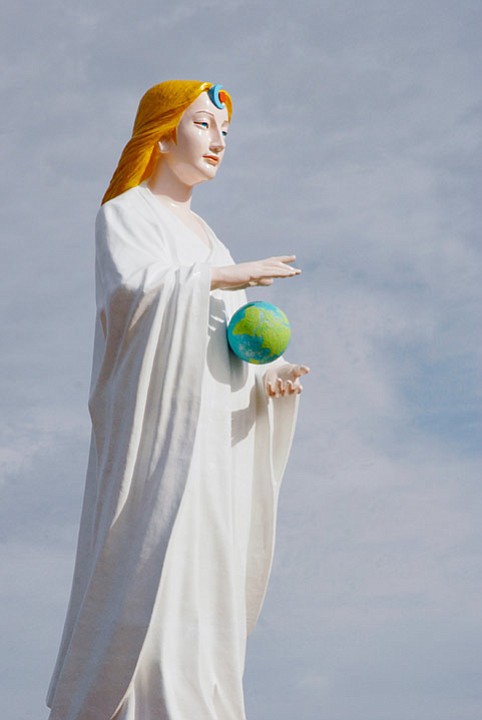 Cottonwood City Hall has now found a larger venue in which to hold the controversial hearing for the Mago Earth Park and Mago Statue.

The hearing will be at the newly renovated Mingus Union High School auditorium. The date is a Thursday evening, Jan. 21 at 6 p.m.

There may be another change. Even after that schedule was established and legally advertised, questions remain about whether it will proceed as planned.

Gehlert, however, says that date and location will remain in place for now, since, by law, the city must advertise hearings 15 days in advance.

In the meantime, the city attorney is to meet Tuesday with an attorney representing the Tao Fellowship to "compare notes," Gehlert explained.

The department has, however, taken one firm action in regards to Mago Earth Park. The city has issued a stop order in one case. A building permit had been approved for security lighting for the statue. However, an inspection of the site has shown that there is already widespread electrical wiring installed for entire park's lighting, rather than just for the specific security lighting permit, Gehlert explained. The Fellowship has proposed a lighting site plan that includes a total of 103 light fixtures for 282,035 lumens.

If the Jan. 21 hearing does proceed, it will be the third formal hearing set on the six-acre Mago Earth Park applications on Cottonwood's northern border. The Fellowship is asking for an amendment to the existing conditional use permit and a design review of the Mago Statue.

The original hearing Nov. 16 was continued when the commission could not agree, but did allow a stipulation "granting the temporary placement of a 50-foot tall statue on site for one week, during a scheduled event on Dec. 16."

A park dedication was held Dec. 16 that attracted hundreds of adherents of the Tao Fellowship plus many other local area residents.

The Mago Statue itself has attracted significant comment and reaction and a subsequent hearing Dec. 21 on the applications was moved to the Cottonwood Public Safety building for its expanded seating.

But, a crowd packed the meeting room to capacity, flowed into the hallway and spilled into the parking lot. Cottonwood police assembled eight officers to manage crowd control and the hearing was once again delayed. Commission asked that an even larger space be found and the meeting be held exclusively for the Mago Park question.

Thursday morning, the city announced that the meeting has been scheduled at the Mingus auditorium.

That remodeled space holds an audience of about 900 people.

Other planning agenda items, not associated with the Mago application, will be considered during the commission's regular meeting, scheduled the following Monday, Jan 25.