Marauders finish No. 2 in region tournament
Six players and coach on the Mingus boys soccer team earns All Region Honors 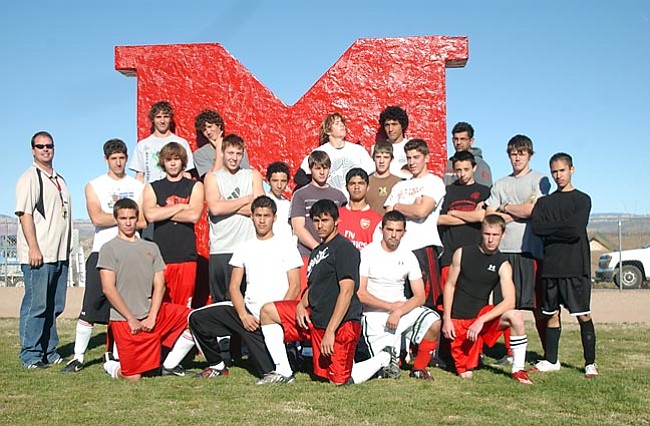 VVN/Wendy Phillippe Coach Cade Densmore (Left) stands with his team. The Marauders made it to the State Tournament.

The Mingus Union boys soccer team faced Flagstaff on Friday in the Grand Canyon Region Tournament Championship game. The Marauders came out a bit flat in the first half, but rebounded in the second. Down 3-0, the Marauders scored two more in the final 40 minutes, but came up short despite out-shooting the Eagles, 8-5 for a final score of 3-2.

The loss, although tough, really didn't mean much as the Marauders gained a ticket to the State Tournament by just reaching the championship game.

The Marauders allowed three Eagle goals in the first half. In the second half the Marauders pressured more right from the start and with only 90-seconds in, Julian Velasquez scored off of a corner kick. Velasquez kicked the ball into the back of the net for a second time just five minutes later after he was awarded a penalty kick.

During the rest of the second half, the Marauders did their best to tie the game up, but the Eagles defense kept the ball out of the goal and the Eagles held on for the one point win.

The Marauders traveled to Glendale on Tuesday for the first round of the 4A II State Tournament.

Region honors: The Marauders enjoyed success this season in the region. Coach Cade Densmore was voted as the GCR Coach of the Year.