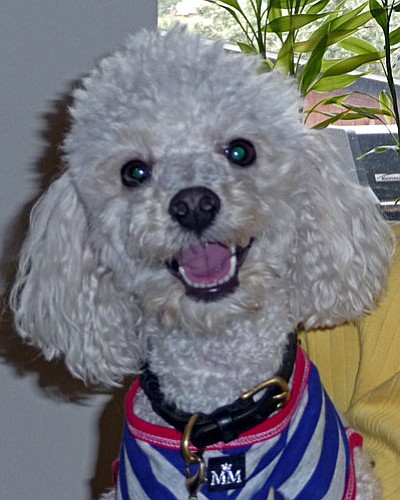 We bought Harry home 3 and a half years ago for our 1st girl dog Kami. Unbeknowns to us he had already been named Harry which was EXACTLY what we had planned to name our 2nd dog if he was a boy. He was the only boy out of a litter of girls and by the time we saw him, he was four months old and all of his sister pups had been sold. His fate was up in the air as we were told, no one wanted to buy a boy poodle. He was extremely unkempt and the people who were selling him purposely did not bond with him for the full 4 months of his life. He was sedate..very shy and VERY skiddish around men. He was peeing in his crate, as we have to assume he was left in it and not taken out very often. Regardless of these things, we felt this pull towards him..we felt we could give him a really good home and a companion with Kami so we decided to buy him. We've worked and worked with him to build his trust, retrained him not to pee in his crate which took over a year. This photo was taken last year on his 3rd birthday. Harry, needless to say, has become come a long long way as he's one happy boy. He loves Kami, his family and he LOVES taking photos!!

Vote this story as your favorite!