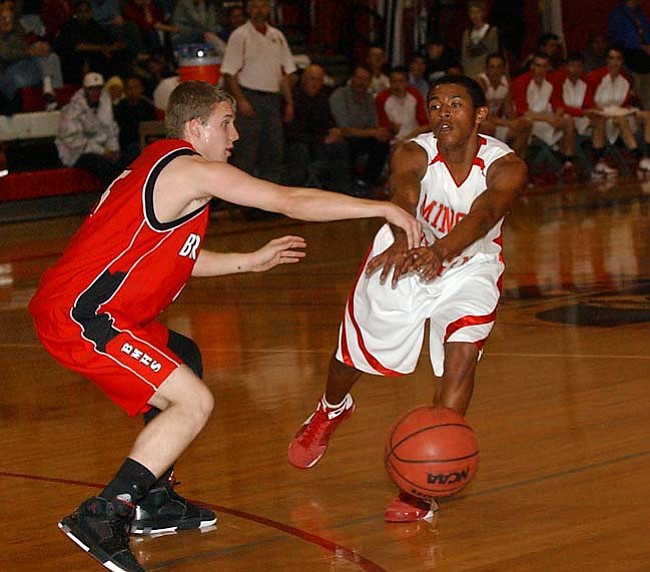 VVN/Wendy Phillippe Brian Jackson passes the ball to a teammate during the game against Bradshaw Mountain Friday night.

The Mingus Union boys basketball team finished out its regular season schedule in front of a packed house on Friday night against the Bradshaw Mountain Bears. It was a dogfight at times, but the Marauders fell short of the win, 65-52.

Bradshaw Mountain jumped out to an early lead, pulling ahead 21-12 after the first quarter. The second quarter was much of the same as the Bears continued to make shot after shot and give the Marauder defenders a run for their money. With two very good 3-point shooters on the outside and a 6-foot, 7-inch post player, the Marauders struggled on defense. At halftime, the Bears led, 42-21.

After a 10-minute halftime break, the Marauders came out inspired to turn the game around. Trevor Sanderlin fired shot after shot and scored 10 of his 12 points in the third quarter. The Marauders outscored the Bears, 18-8 and came to within 11 points with one quarter to go.

"I told them that we need to get those points back - one possession at a time," said coach Scott Sanderlin. "It was senior night and they were playing for pride."

The surge in points from Mingus continued in the fourth, but the Bears did a better job of getting the ball into the basket and both teams traded shots in the last quarter. The Marauders ran out of time and the Bears got the 13-point win.

Chris Johnson had a very good game. He scored 21 points to lead the Marauders. Sanderlin had 12 points and CJ Taylor scored seven before fouling out. Defensively Luis Pedrego and Brian Jackson were aggressive and caused some frustration for the Bears.

Before the game, the Marauder seniors were honored with their family, alongside the girls basketball seniors. This year's team has seven seniors on it. Recognized for their contributions to the MUHS program were: Aaron Neuhaus, Trevor Sanderlin, Chris Johnson, Ty Meacham, Brian Jackson, Luis Pedrego and CJ Taylor.

Next up for the Marauders is the first round of the Grand Canyon Regional Tournament. Mingus will play at Coconino on Tuesday at 7 p.m. Mingus will have to win if they want to continue with the season. A win will put them at the NAU Dome on Wednesday in the tournament semifinal game and the championship game is on Friday in the Dome.