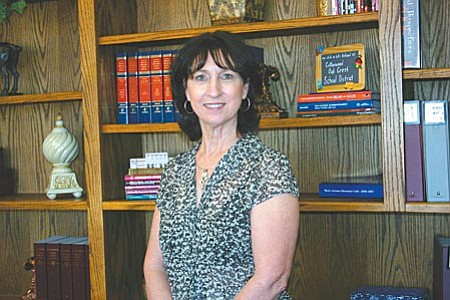 The fallout from severe budget cuts in education from the state is already having an impact at Cottonwood-Oak Creek School District. The district will get through the remainder of this school year, but positions will be lost next year, including 12 teachers' positions.

Superintendent Barbara U'Ren has already made notice of cuts for next year in administration. The Director of Special Education position now held by Kim Rice will be cut and restructured within the district administration.

"We still have strong leadership in the position of special education," U'Ren said. "I don't want my parents to think that their children's needs will not be met. We are all taking on extra duties, including me."

Also assistant principal/dean positions will be cut from four elementary school campuses. That position at Oak Creek School will happen through attrition and no job will be lost. At Dr. Daniel Bright School, Tammy Buck's position has been cut, along with Mary Valenzula at Cottonwood Elementary and Stacy Kramer at Tavasci Elementary.

"They will be offered classroom positions," U'Ren said, "or they will be picked up through Title I."

In addition, the district will lose five teacher positions because of a drop in the district's average daily attendance. Another seven teachers will be lost due to a drop in money coming into the district's English Learner Program. U'Ren said last year the district received $370,000, and that has been lowered to $43,000 for next year.

"We hope that through attrition, we can keep everybody," U'Ren said.

She said the decision about the administrative positions was hers. Other cuts will come through recommendations of a budget committee.

School districts statewide have been hit with budget cuts in maintenance and operation for the remainder of this year. Some districts actually have to return money to the state.

"We're OK for this year because of carryover from last year," U'Ren said.

"We have frozen everything," she said. That includes hiring, overtime, purchase orders, extra duty and any projects.