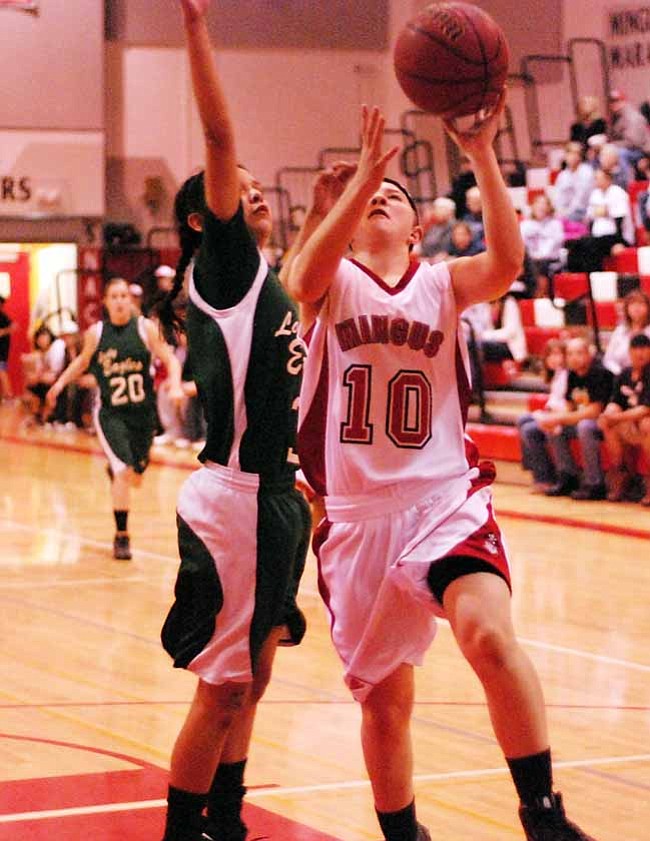 VVN/J. Pelletier No. 10 Kayla Storie goes for the shot under the basket during the game against Flagstaff Thursday night at MUHS.

The Marauders and Eagles battled it out Thursday night at MUHS for the rights to go onto the Regional Tournament Championship game on Friday. The Marauders, who split with Flagstaff during the regional schedule, defeated the Eagles 51-49.

Flagstaff jumped out ahead early in the first quarter, 17-8 and both teams went shot for shot in the second quarter. At halftime, the Eagles held a 27-19 lead.

Storie led the Marauders with 21 points and really came on strong to keep Mingus in the game. Christina Hagberg finished with 14 points.

"We didn't shoot the ball well," said coach Bob Young. "They did a great job on defense and we just couldn't get anything going in the second half."

Page jumped out to an early 12-6 lead in the first quarter. In the second quarter the Sand Devils extended their lead by scoring 17 to Mingus' nine. In the third quarter, neither team had a run at the basket as the Sand Devils edged Mingus 8-5. In the fourth, the low scoring continued with Page getting the advantage, 9-7 for the win.

Up next for the Marauders is the 4A II State Basketball Tournament. The No. 5 Marauders will host the first round game on Tuesday at 7 p.m. against No. 12 Arcadia. The winner of Tuesday's game will face the winner of the No. 4 Palo Verde vs. No. 13 Catalina. The game will be played at the high seed on Friday at 7 p.m.