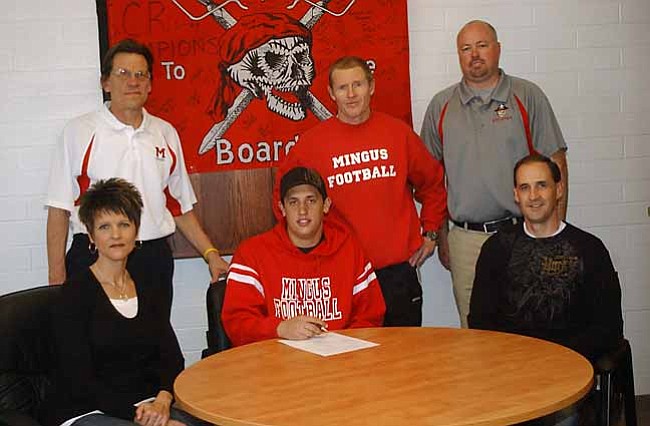 Taylor received an athletic and academic scholarship through Dixie State College for a combined amount of about $13,000 per year. This will pay for most of his college expenses, less food and books.

Taylor will be able to pay some of those other expenses through another scholarship, awarded by the National Football Foundation. Taylor was selected as a finalist for the 2009 NFF Scholar-Athlete Class and will receive $1,500.

Taylor is a standout athlete and student at MUHS. He has a 3.92 GPA and plans to go into the medical field. Taylor also plays basketball and baseball for the Marauders.

Taylor is very busy with studies, sports and community service. He is showing no signs of slowing down after high school. Taylor will play a semester of football for Dixie before he begins a 2-year mission for the LDS Church in January, 2010.

After his two-year mission is complete, Taylor will be able to return to Dixie and continue his studies and play football.

"I don't know what position I am going to play, but I want to play d-line," said Taylor. "I am going to miss high school football. Playing in a small community is like playing in the NFL. Football taught me to never give up and to play through adversity. Coach Young teaches you skills to survive in life."

Coach Young was also the one who suggested that Taylor apply for the NFF scholarship.

Taylor will receive his NFF award on Feb. 21 at the Hilton Scottsdale Resort. He is among 23 finalists and semifinalists picked. With his award, Taylor's name will also be permanently enshrined in the College Football Hall of Fame in South Bend, Ind.