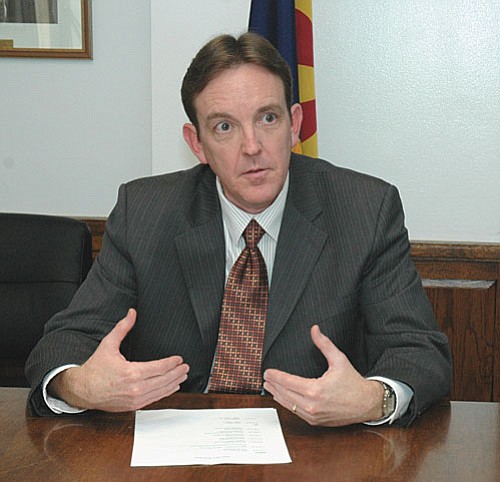 Capitol Media Services photo by Howard Fischer<br> A former state senator from Prescott, Ken Bennett has been selected as secretary of state.

Brewer said she intends to have Bennett, of Prescott, do more than run her office once she becomes governor after Janet Napolitano leaves later this month. She said she wants Bennett to play an active role in her administration.

He pointed out that while he was Senate president the state weathered its last deficit after tax collections did not keep pace with expenses following the 2001 terrorist attacks.

"I think that is a background and an experience that will allow me to help in more areas than just the statutory and constitutional roles that this office will continue to perform,' he said.

Bennett said Brewer has never made any secret of her belief that the secretary of state really should be considered part of the administration, as shown by her repeated efforts to have the office renamed "lieutenant governor.' That includes one proposal, rejected by voters in 1994, to have the governor and lieutenant governor run as a ticket, similar to the president and vice president.

He acknowledged that, in his case, he was not elected to anything by anyone. But Bennett, a Republican like Brewer, said that should not preclude him from trying to help her both manage the state implement her ideas.

Bennett also said there is something to be said for Brewer's idea of having the top two officials run as a ticket.

"The plus of that approach is people know that the philosophies of the possible successor are probably pretty close in line with the one that they're initially electing as governor,' he said.

He pointed out that this will be the fifth time in 32 years that an Arizona governor has not completed a term, with reasons ranging from resignation to impeachment and death. In two of those cases -- including this one -- control of the office is going from a Democrat to a Republican.

For the moment, Bennett is ineligible to become governor if Brewer leaves office before the end of her term in 2010 because he was appointed and not elected. Instead, the next in line is Attorney General Terry Goddard.

But Bennett made it clear he would like to seek a term of his own in 2010.

Bennett, who also was a member of the Prescott city council and president of the state Board of Education before his eight years in the Senate, said he believes he can work with lawmakers of both parties.

Former Senate Minority Leader Marsha Arzberger, a Willcox Democrat, said Bennett was "a very congenial president, and he was cooperative with both parties.'

But she said that did not necessarily make him a friend to Democrats.

"When it came down to the final budget negotiations, he went partisan,' she said.