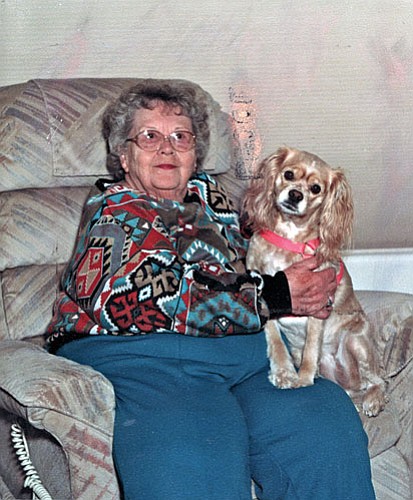 Wilma Irene Morlock, 87 of Clarkdale, Arizona, passed away at her home on Saturday, January 3, 2009.

Wilma, the eldest daughter of Clyde and Beulah Glazebrook of Weldon, Iowa, was born on Dec. 27, 1921. Wilma graduated from Grand River High School and went on to Simpson College where she met the love of her life, William C. Morlock.

Wilma moved from Iowa to Montana where she continued her teaching career working in rural schools. Wilma received her Bachelor of Science in Elementary Teacher Education from Northern Montana College in 1967. Wilma taught at the Miley School in Big Sandy, Mont., from 1967-1973. Wilma was a lover of education and never stopped teaching her children and many grand children life lessons.

Bill and Wilma spent summers along the Missouri River at their home in Cascade, Mont., and winters in Hemet, Calif., where they met many friends. In 1993, Bill and Wilma moved to Clarkdale, Arizona, to be closer to family.

Wilma was preceded in death by her husband, William Morlock in 2000. She is survived by her daughter , Merri Ellyn Warner and husband Stephen R. Warner of Clarkdale, AZ; her son, William C. Morlock Junior of Merced, Calif., a sister, Norma Banks of Altoona, Iowa, eight grandchildren, 20 great grandchildren, and one great-great grandchild.