Garrison to remain as C-OC board president 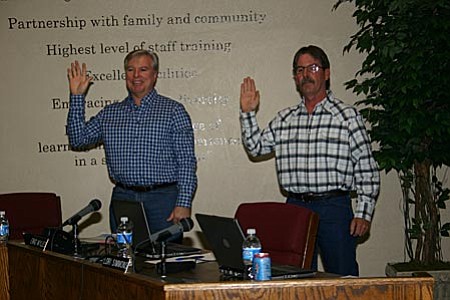 The C-OC board is made up of five members including Jason Finger, Lori Simmons and Janice Rollins.

After the swearing-in ceremony, the board voted to keep Garrison as its president and elected Finger as the vice-president. Lori Simmons had served as vice-president but encouraged the board to allow another member the opportunity to serve in that position.

During discussion of who would serve as president and for how long, Simmons said she would like to see Garrison remain in the position.

Carter said it is the board's decision how long the officers' terms are. "The state allows your board to appoint for one year or two years," Carter said. "The other option is to combine the name with the number of years."

At first, the board wanted Garrison to remain as president for two more years. Although he said he is happy to serve as the board president, he felt the opportunity to do so should be shared.

Finally, the board elected Garrison as president and Finger as vice president, both to serve one-year terms.

The C-OC board meets the second Tuesday of each month at 5:30 p.m. The board meets in chambers in the district office building at 1 N. Willard in Cottonwood.