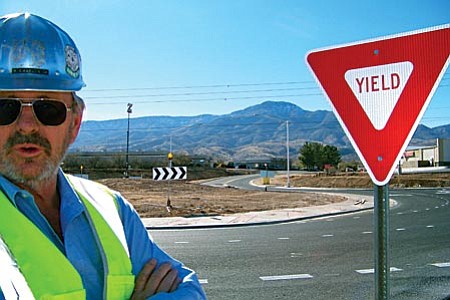 Project supervisor for S.J. Lewis construction of the four-lane SR89A looks down the highway from the new roundabout at Black Hills Drive.

Just when you thought it was safe to go back onto the road, ADOT is about to award a new highway contract.

The Arizona State Highway Board is expected to give the go-ahead this Friday to a series of safety improvements for SR260 through the remainder of the two-lane section between Cottonwood and Camp Verde.

Traffic was allowed on to the two new westbound lanes of the state highway beginning last Friday.

Ames construction crews will return in April to mill off the surface of the old eastbound highway section and resurface the highway.

Meanwhile, between Cottonwood and Clarkdale, S.J Lewis Company is completing the four-lane highway punch list and planting landscaping on the roundabouts.

New work will begin within the next two months to construct safety improvements on the remaining two-lane SR260 between Thousand Trails and Interstate 17. Combs Construction Co. has bid $1.7 million to construct the improvements, about 9 percent below engineering estimates.

Passing lanes will be installed between Cherry Road and Coury Drive.

The work will also improve the intersection of Horseshoe Bend, widen the shoulders at Park Verde, add a left turn lane to Dickison Circle and slopes will be flattened to provide better sight distance.