Busy as a Bee: Top county spellers square off in February 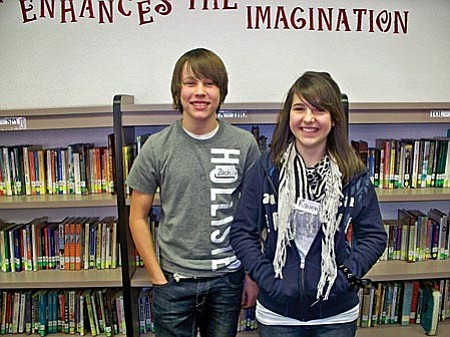 Courtesy Photo Raven Collins, left, was the winner of the Cottonwood Middle School Spelling Bee Jan. 8. She will represent the district at the Yavapai County Spelling Bee Feb. 18 in Prescott Valley. Zach Pelletier, eighth grade, was runner up.

The home school competition was divided into two levels, kindergarten through third grade, and fourth through eighth grades. Viveca Lawrie was second in the 4-8 division, which was won by Sandoval. Aurora Lawrie was third.

The county bee will be Wednesday, Feb. 18 at Franklin Phonetic School in Prescott Valley. Special recognition will go to first, second, third and fourth-place winners. The winner will compete in the Arizona State Spelling Bee. The state winner will go on to participate in the Scripps National Spelling Bee in Washington, D.C. May 26 & 27.