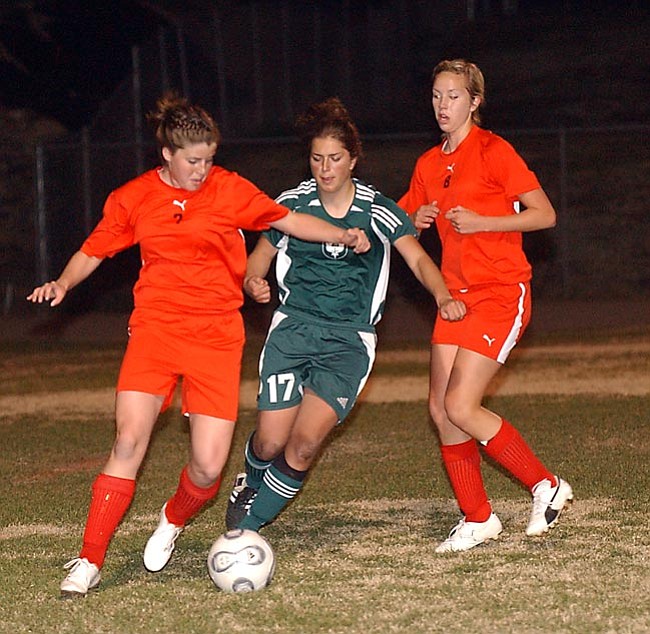 The Marauders took it to another overtime on Saturday night against Coconino on the road. This time the Mingus Union girls soccer team pulled out the win in OT, 3-1.

It was a good thing that he didn't, because the Panthers battled hard against the Marauders and after the first half of play, the score remained tied 0-0.

It took Mingus another 20 minutes in the second half to score the first goal of the game. Natalie Rivera headered the ball into the goal off of a cross by Torey Braly.

With about two minutes left in the half, the Panthers tied the score, dribbling the ball through Marauder defense and booted it past Fanning at the goal.

The tie put the game into overtime. Before the girls hit the field, the Marauder team gathered together to talk about things. Cassie Bailey made a suggestion to put Drea Duke from the midfield to the front.

The new placement worked. With only about 30-seconds ticked off the clock in the first half of overtime, Alexis Nevitt passed the ball to Bailey who got it to Duke. Duke rocketed the ball into the back of the goal.

The Marauders continued to play hard and was able to work the field. About two minutes into the second half of OT Rivera scored her second goal of the game off of a Riley Backus corner kick, which was kicked near the goal but bounced off by Kayla Dixon. Rivera got the ball off of the deflection and kicked it in.

Mingus' defense held the Panthers to that one goal and won the game, 3-1.

Consistent play out of the defense's back four: Riley Backus, Jessie Zaske, Deserata Braly and Ali Adams makes it possible for the Marauders to stay in games and keep their opponents quiet. Dixon and Alexis Nevitt do a great job controlling the midfield.

The Marauders hit the field again today to take on the Bradshaw Mountain Bears in Prescott Valley. Game time is 5 p.m. Mingus finishes up their regular season schedule at home on Saturday against the Sinagua Mustangs. That game begins at 1 p.m. at Mingus Union High School.