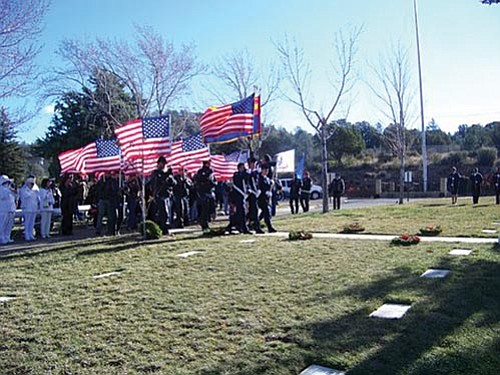 Courtesy Photo<br> Prescott National Cemetery has more than 4,000 graves of United States military men and women. The America Legion Riders of Verde Valley is raising money to place wreaths on each grave during a full military ceremony the second Saturday of December. The ceremony will be coordinated with one at Arlington National Cemetery.

American Legion Riders are raising $60,000 to place a wreath on each of 4,000 veterans' graves at Prescott National Cemetery next December.

For the past 15 years, Worchester Company has donated more than 320,000 wreaths to Wreaths Across America, an annual ceremony held the second Saturday of December at Arlington National Cemetery. The company also has donated an additional 7 wreaths to each of more than 350 national cemeteries nationwide. Those seven wreaths are used to honor each of the five branches of the United States military, one for the Unknown Soldier and one to honor the Prisoners of War and Missing in Action men and women.

"I'm trying to cover our 4,000 at Prescott National Cemetery," said Lettie Connell, finance officer for American Legion Riders of Post 93 in Camp Verde and Post 25 in Cottonwood. "I'm going around Northern Arizona to raise funds for our national cemetery."

Those wreaths will be placed on veterans' graves in Prescott during a ceremony coordinated with the one at Arlington.

The organization also is hoping to get small American flags to place on each of the graves to be used to attach the wreaths to.

Connell said some of the money used to buy the wreaths is used in other ways. One is for education of children about America's veterans. Another is to support the America Legion Legacy Scholarship, a program that helps pay for the college education of sons or daughters of United States soldiers who have died in Iraq and Afghanistan.

The American Legion Riders have a 501(c)(3) tax status, so contributions to Wreaths Across America are tax deductible.

Individuals or groups may donate any amount to American Legion Riders Wreaths at any National Bank of Arizona, or by calling Lettie Connell at (928) 567-5012 or by mail to Lettie Connell, 2922 S. Aspen Way, Camp Verde, 86322.