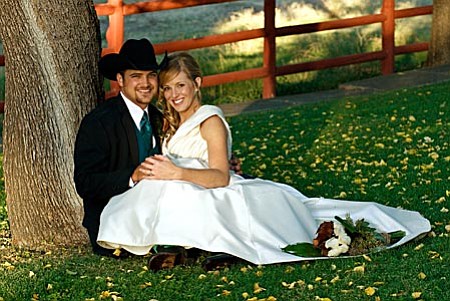 Lana Turner and Anthony Randall were married Oct, 5, 2008, at El Rancho Roca Rojo near Sedona, AZ. The ceremony was performed by the Honorable Judge Overholser and Cash Chamberlain, friend of bride. The traditional ceremony was held under the large, beautiful trees of this old Arizona landmark ranch in Northern Arizona. The bride is the daughter of Karren "Sparky" Turner and Steve and Nancy Foulk of Fowler, Colorado. The groom is the son of Gary and Theresa Davis of Camp Verde, Arizona.

Presented in marriage by her father, the bride was attended by her dear friend, Jolene Williamson of Cross Plains, TX as maid of honor; bridesmaids were Candy Chamberlain of Wildhorse, CO, Dorothy Sallee of Fowler, CO, Krista Kester of Williams, AZ and Marie Moore of Camp Verde, AZ. Jay Randall, brother and best friend of groom, was the best man. Randall resides in Williams, Arizona.

The bride is a certified Speech Language Pathologist Assistant for Cottonwood Oak Creek School District and the groom is a certified equine dentist and ferrier, serving the Verde Valley. The newlyweds reside in Rimrock, Arizona.