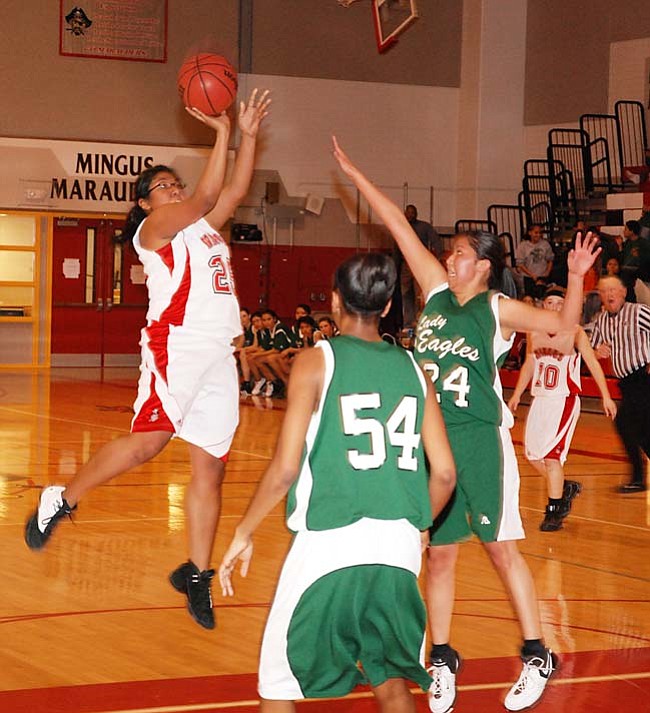 The Mingus Union girls basketball team has played some tough teams over the past week ... and they were up for the challenge.

On Jan. 23 the Marauders hosted the Page Sand Devils and lost a close one, 46-42. The Marauders regrouped on Saturday and took down the No. 3 team in the 4A I, Prescott by a score of 52-49. Finally the crown jewel of the past week was dominating rival Flagstaff at MUHS on Tuesday night, 65-37.

Christina Hagberg led the Marauders with 15 points, followed by Shaina Gyce with 12.

On Saturday the Marauders traveled to Prescott and took on the Badgers in a non conference game. The Marauders had lost against Prescott earlier this season during the Bradshaw Mt. tournament, but that wasn't going to happen again.

The Badgers edged ahead in the first quarter, 13-10 but it was Mingus that caught fire in the second quarter, outscoring the Badgers 18-11 and taking a 28-24 lead at the half. In the third quarter the Marauders continued to press and extended their lead to eight points. The Badgers made up some ground in the fourth but couldn't catch up as the Marauders' great effort resulted in the win.

Again, Hagberg led the Marauders with 20 points, followed by Gyce with 13.

On Tuesday the Marauders laced up and hit their home court to face rival school Flagstaff in a 4A II matchup. The Eagles won their first game together only a couple of weeks ago but this time around was a different story.

The Marauders jumped out ahead immediately in the first quarter, 16-11. The intensity brought by the Marauders continued through the second quarter. By halftime Mingus was up, 26-19. Things didn't slow down from there.

Instead the Marauders blasted out of the gates in the second half, outscoring the Eagles 20-10 in the third quarter and put an exclamation point on the night's game with a 19-8 fourth quarter for the 28-point blowout win.

Hagberg led the team with 14 points, followed by Gyce and Wokasch with 11-apiece.

"We've played good defense all year long and we just shut them down in the second half," said coach Bob Young. "Offensively we make our shots and everything just worked. It was a great game."

The Marauders hit the court again tonight when they take on the Sinagua Mustangs at home at 5:30 p.m. Last time the two teams played each other, it was at Sinagua and the Mustangs edged the Marauders by one point at the buzzer.