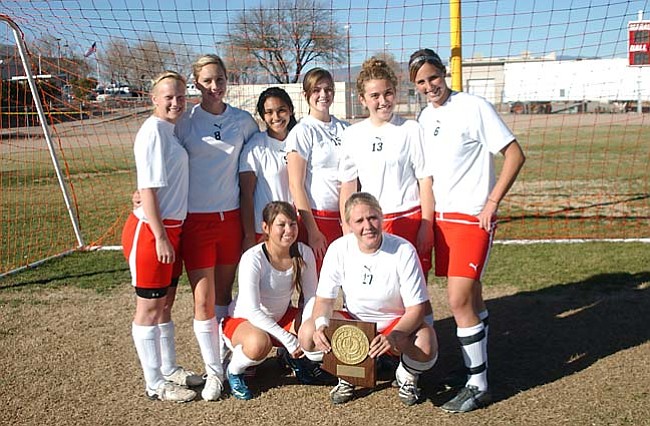 The Marauders began immediately taking control of the game. It took less than three minutes before Mingus found the goal for the first time on a solo breakaway by Drea Duke.

"Drea always brings a lot of intensity to a game," said coach Buddy Rhodes. "She'll often win a free ball, beat two people and pass it off for the assist. He brings a lot to the team."

Cassie Bailey scored Mingus' second goal with the assist from Natalie Rivera. It was a perfectly executed give-and-go between the two. Bailey passed the ball out to Rivera to the outside. River took the ball and passed it back to Bailey in front of the goal and Bailey knocked it in.

The Marauders' third goal came from a sister duo. Deserata Braly advanced the ball out of the defense to the outside. She crossed the ball over to sister Torey Braly who kicked the ball into the back of the net.

The fourth goal of the half came with about 5:30 left on the clock. Natalie Rivera knocked the ball into the back of the net with the assist by Torey Braly.

With the halftime score, 4-0 coach Buddy Rhodes used the second half to mix things up a bit and give other girls some playing time. But the Marauder stranglehold on the game was never relinquished.

Sinagua's only goal came with about 11:30 left in the second half off of a breakaway as the Marauders experimented with various players in different positions.

The Marauders will face Flagstaff in the Regional Tournament today at MUHS at 4 p.m. Regardless of the outcome, the Marauders and Eagles will both be making a trip to the State tournament, which begins on Tuesday. The Marauders will host the first round game.

Coach Rhodes earns the honor for the second year in a row. He attributes his success to the invaluable help from his assistants: Phil Van Gorp and Heidi Nadeau.